Crude oil prices slipped back in Wednesday’s Asian session following surprise news of a huge build in US inventories, with another look at the same subject coming up later.

According to the American Petroleum Institute, stockpiles were up by 4.3 million barrels in the week ending October 1. That was nearly three times market expectations. These numbers are to some extent curtain-raisers to Wednesday’s official figures from the Energy Information Administration which will now command the lion’s share of market focus.

Energy prices were supported by enduring hopes that US-China trade talks can make progress, but the market remains dogged by oversupply worries. The latest outlook from the Organization of Petroleum Exporting Countries foresees heave reductions in demand.

Brazil will shortly conduct an auction of production rights which will involve some of the industry’s biggest players. The outcome of this could be an important price bellwether.

Gold prices tumbled below the $1500/ounce mark in the US session as equity markets pushed on to new record highs. There was no similar impetus in a less dramatic Asian session leaving prices to meander around the $1485 area. News on trade is likely to dominate this market for the rest of the day as heavyweight economic markers are thin on the ground.

Prices have made a modestly bullish succession of ‘higher highs’ since arresting its September fall at the lows of October. 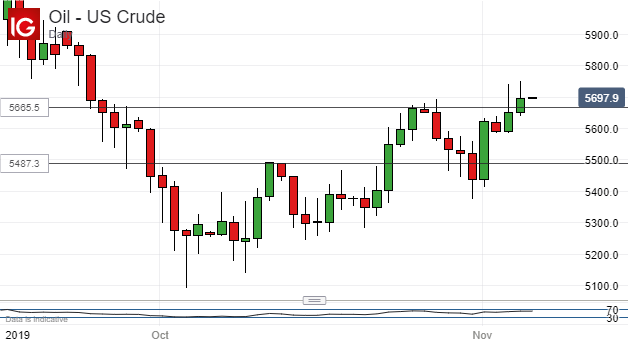 The most recent upward thrust has only just managed to top the market’s previous significant high, however and, although the bulls have taken back some of September’s falls, there may have to be some consolidation before that process can get back on track.

Prices remain within the gradual downtrend which has been in place since early September. Increased optimism that the US-China trade situation might, at least, get no worse, has weakened demand for haven assets to the benefit of riskier bets.

Near-term support comes in at September 30’s low $1474, a point which is also the market’s lowest point since early August. Risk appetite may be too fickle to allow the market to get much below that, however.