Gold prices and Brent may suffer after the FOMC minutes are published if the underlying tone in the text does not reflect the same level of urgency for easing that investors are expressing. At the time of writing, overnight index swaps are pricing in an 85 percent probability of a third cut this year by the October meeting. However, these hopes may be dashed if the minutes undermined the markets’ dovish expectations.

On October 8, Fed Chairman Jerome Powell’s remarks at the NABE conference in Denver certainly caught investors’ attention, especially after he said the central bank is considering purchasing T-Bills. However, Mr. Powell was quick to dispel any notions that this is a prelude to reintroducing QE. He subsequently reiterated what he has been saying for over a year: the Fed is on a data-dependent path and will adjust policy accordingly.

However, this did not stop gold prices from rising and ultimately ending the day higher on the hopes that the Fed will deliver more cuts as economic conditions worsen. The Chairman added that geopolitical developments continue to be a major factor affecting the outlook along with global developments in general posing a threat to a “favorable” US economic outlook.

Market volatility from the FOMC minutes may also be exacerbated by the update the IMF’s World Economic Outlook. For several publications, the organization has reiterated that global headwinds continue to blow with the sails of the global economy closer to the rocky coast of a recession. Global trade uncertainty is the biggest protagonist with economic conflicts around the world disrupting the flow of critical inputs to power growth.

Brent has not deviated from its congestive range, indicating traders are hesitant to commit capital until a clear directional preference is given. However, as outlined in my Q4 forecast, the path of least resistance suggests an underlying downside bias may ultimately overwhelm upside pressure from hints of monetary easing or politically-induced supply disruption fears. Traders may be waiting for key catalysts like the FOMC minutes and upcoming US-China trade talks before it either capitulates or attempts to make a break above $59.34/bbl. 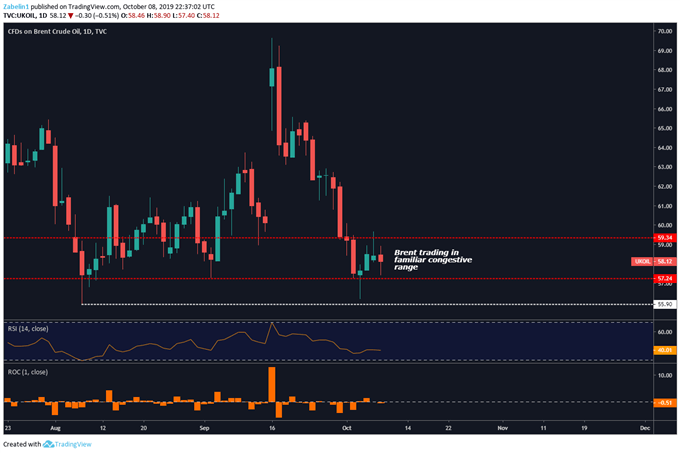 Gold prices edged as high as $1509.74 for the day but ultimately closed at $1505.62. The yellow metal is now touching falling resistance that forms the upper crust of what appears to be a bearish reversal pattern known as a Descending Triangle. A break above with follow-through would invalidate the pattern while a turn away from resistance would reinforce the strength of resistance. 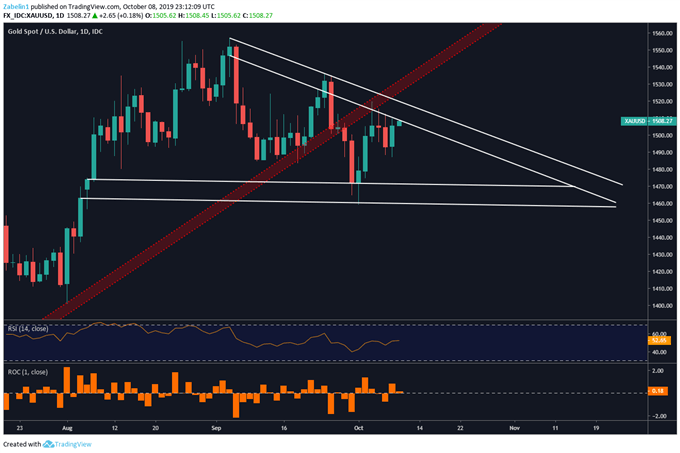