Sentiment-linked crude oil prices will be on the watch for key commentary from Fed Chairman Jerome Powell after last week’s cascade of weak economic data, particularly manufacturing. October rate cut bets subsequently swelled from a 39 percent chance to a 72 percent probability by last Friday. This is in large part due to the central bank reiterating they are using a data-dependent approach to monetary policy.

Therefore, since the data has softened, naturally, this led to a spike in easing expectations. Gold subsequently rallied but failed to resume its previous steep uptrend and crude oil prices took a hit from growth concerns, though their decline was partially cushioned by the prospect of future rate cuts. Markets will be eagerly tuning in to Mr. Powell’s commentary to see if his outlook for policy will match investors’ dovish expectations.

Crude oil prices continue their descent after their over-19 percent spike following the Saudi Arabia Aramco attack, and are now hovering in a familiar range between $57.24/bbl-$59.34/bbl. The congestive price action could be due to traders waiting for major fundamental catalysts this week like the release of the FOMC meeting minutes and the US-China trade talks. 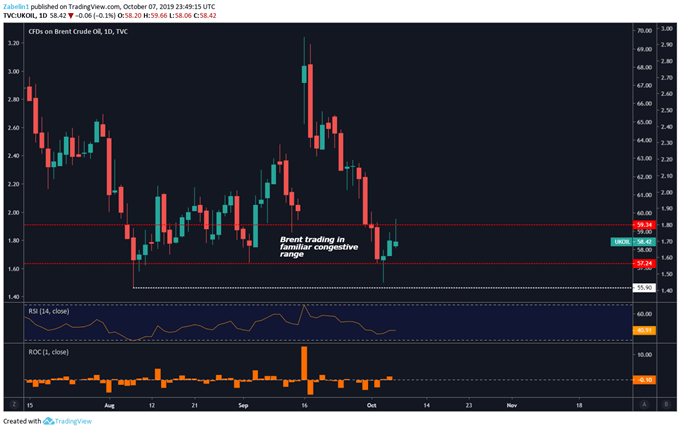 Gold prices appear to be forming a bearish Descending Triangle pattern after it broke through the multi-month rising support zone (red channel). If a downside breakout occurs, traders may wait for confirmation before committing to a downside directional bias. Another sign traders will be looking for is increased selling volume if the prices breach below the horizontal channel.

If a breakout occurs with follow-through, interestingly enough, the target may be a familiar range between $1357.12-$1366.06. This lends credence to the notion that a bearish reversal pattern may be forming on the basis that it’s projected decline stops just short of a previously-traded range.