Both gold and crude oil prices saw volatile trading conditions as disappointing data out of the world’s largest economy impacted markets across the globe. Risk trends began deteriorating after US jobless claims rose 219k in the last week of September, surpassing the 215k estimate and matching readings from the end of August. Then, the S&P 500 further dipped as ISM non-manufacturing PMI clocked in at its lowest in over three years.

In turn, this has translated into the markets doubling down on bets that the Federal Reserve will come in to save the day with a third cut this year later this month. As a result, market mood recovered by the end of the day and so too did sentiment-linked crude oil prices. Meanwhile, anti-fiat gold prices rallied as the US Dollar declined alongside front-end government bond yields. Though the precious metal trimmed gains later on.

With that in mind and the recent focus on US economic data amid uncertainties surrounding trade wars, all eyes for commodities are on the upcoming non-farm payrolls report. Economists are expecting the country to add 145k jobs in September as unemployment holds at 3.7 percent. Outcomes in line with the deterioration in local data as of late may further fuel monetary easing bets.

Then later in the session, we will get commentary from Fed Chair Jerome Powell. Softer data may pressure the central bank to consider additional cuts in order to sustain growth with policymakers split on further reductions in benchmark lending rates. Otherwise, disappointment in rising dovish bets risks sending gold and crude oil prices lower.

Learn more about what NFPs are and how you can trade it!

Gold prices have continued to invalidate the bearish Head and Shoulders setup after the precious metal was unable to breach key support (1480 – 1485). This has left XAU/USD facing what could be a potential falling trend line – blue line on the chart below. We may see gold climb higher amid bullish contrarian trading positioning signals from IG Client Sentiment. 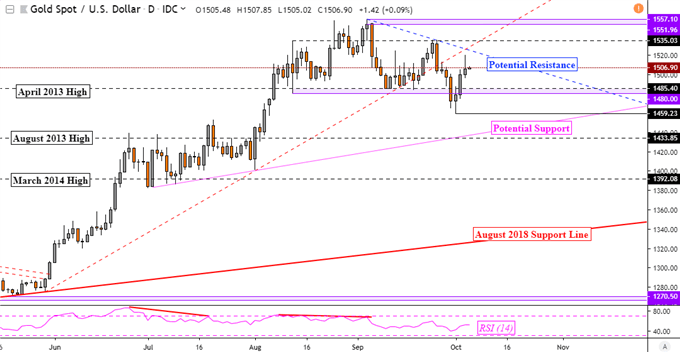 Meanwhile, crude oil prices are entering the upper boundary of critical support which is a range between 52.08 – 50.41. This follows a prolonged downtrend since the middle of September after finding a top just under 63.32. Bearish-contrarian crude oil signals suggest that the commodity may continue sinking deeper into support. If the lower boundary at 50.41 is taken out, that may open the door to testing 49.13.

Join me on Wednesdays at 00:00 GMT as I uncover what IG Client Sentiment has to say about the prevailing trends in financial markets, going over how to use this as another tool in analysis 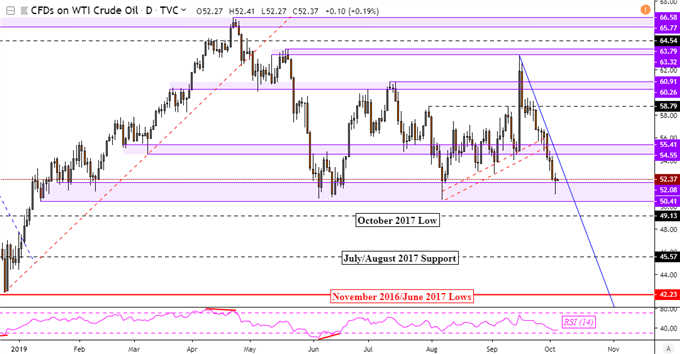