Gold prices idled in familiar territory for a fifth consecutive day, with traders seemingly unwilling to show conviction one way or the other ahead of the Fed monetary policy announcement. The US central bank is widely expected to issue another rate cut.

Indeed, futures markets imply that the probability of just such an outcome is priced in at a commanding 100 percent. The chance of a 25bps reduction is favored at 77.7 percent and the possibility of a 50bps downward adjustment is nevertheless at a non-trivial 22.3 percent.

Such conviction clashes with the Fed’s more circumspect guidance, yet it seems investors have already baked in their version of perfection into asset prices. That makes the risk of disappointment asymmetrically high: the likelihood of a relatively hawkish outturn seems much greater than a dovish one.

That might pressure sentiment-sentiment crude oil prices. The benchmark WTI contract plunged yesterday – erasing almost half of the dramatic upward gap registered at the weekly open – as Saudi Arabia assured investors that there not be a lasting supply disruption after the weekend’s attack on its Abqaiq plant.

Amin Nasser – CEO of Saudi Arabia’s state-owned oil giant Aramco – said output from the damaged facility has been restored to about 2 million barrels per day, recovering close to half of pre-attack capacity. He added that a full rebound is expected by the end of September.

EIA inventory flow data is also on tap. A drawdown of 2.5 million barrels is expected. Leading data from API pointed to an increase of 592k barrels. If that proves to foreshadow a disappointment on official statistics, any FOMC-related downside pressure may be amplified.

Get our free guide to help build confidence in your gold and crude oil trading strategy!

Gold prices may be forming a bearish Head and Shoulders (H&S) topping pattern, with confirmation on a daily close below 1480.00 implying a measured move down though interim support in the 1437.70-52.95 zone toward the $1400/oz figure. Alternatively, a push back above 1523.05 targets the weekly chart inflection level at 1563.00 once again. 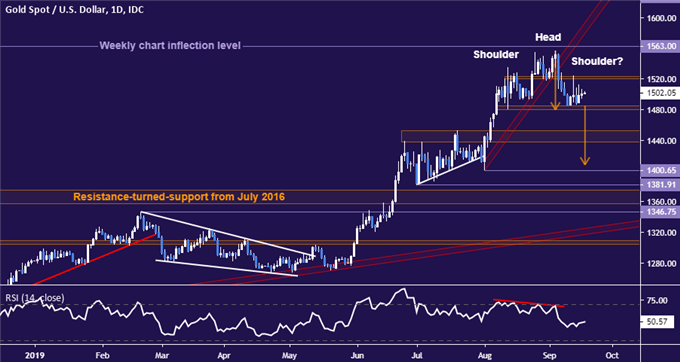 Crude oil prices plunged back below the $60/bbl figure to challenge former resistance 58.76, the September 10 swing top. Breaking back below it on a daily closing basis puts trend line support set from early August (now at 54.28) back in play. Alternatively, a rebound back above the 60.04-84 area opens the door for a challenge of the 63.59-64.43 zone. 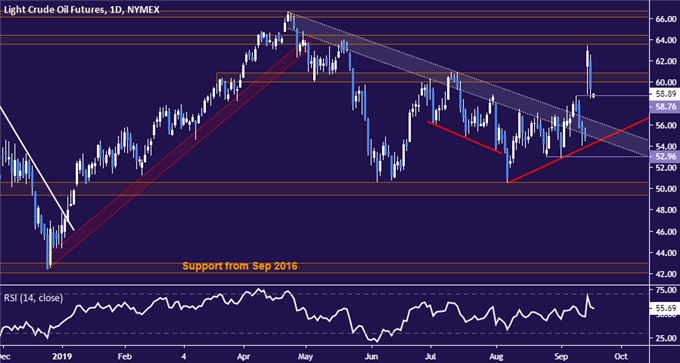