Both crude oil and gold prices held on to their directionless trade over the past 24 hours, which has also largely prevailed this week, as anticipation of a US-China trade deal waxed and waned. Initially, sentiment was generally pessimistic as US President Donald Trump said that China ‘broke the deal’ in early Asia trade. This eventually resulted in gains to the anti-risk US Dollar which worked against anti-fiat gold prices.

Then later in the day, a welcoming update from Mr Trump on trade talks reversed that trading dynamic which helped result in a mixed day for gold. A similar dynamic was witnessed in sentiment-linked crude oil prices as an attempted recovery on Wall Street fell short of closing the downside gap. Commentary from Fed Chair Jerome Powell ended up passing without incident as he did not discuss either monetary policy or the economy.

Crude oil prices are aiming higher in early Friday trade following the conclusion of the first day of US-China trade talks. Sentiment got an uptick following a report that Trump, Treasury Secretary Steven Mnuchin and Trade Representative Robert Lighthizer were talking about progress in negotiations. The fate of the commodity, and whether or not gains may last likely depends on the outcome of the negotiations.

Still, over the next 24 hours we will get the US CPI report. According to the US Citi Economic Surprise Index, data is still tending to underperform relative to economists’ expectations. Albeit, this has been by a shrinking margin since late April. Notable examples of mixed data were the last US jobs and GDP report. More of the same can be reflected in the inflation report, supporting a neutral Fed outlook as gold trades sideways.

For timely updates on US-China trade talks and the reaction in commodities, follow me on Twitter here @ddubrovskyFX.

Crude oil prices are attempting a break above the near-term falling resistance line from late April following a tepid Thursday. Confirming a close to the upside would thus open the door to retesting August 2018 lows which held as new resistance in the middle of April (blue dotted line below). Otherwise, a collapse in trade talks could potentially expose support at 60.26. 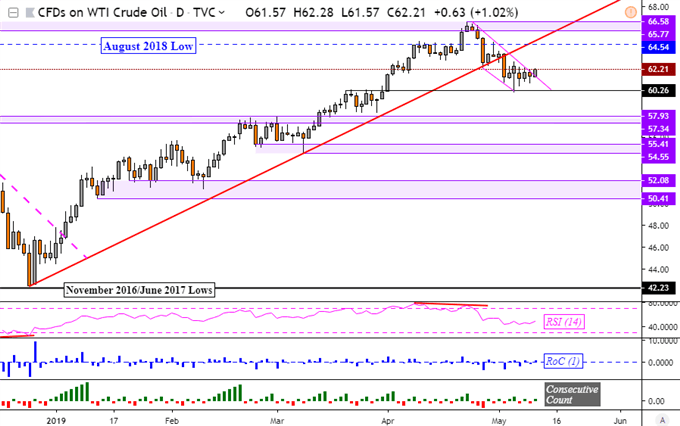 Another attempt to test the falling resistance line from February fell short of expectations, gold prices still remain wedged between that and the rising trend line from August. As mentioned yesterday, each passing day brings us closer to a breakout, be it higher or lower. Sentiment signals do suggest a bearish gold-contrarian trading bias, to learn more about what this means, join me each week for reoccurring live sessions! 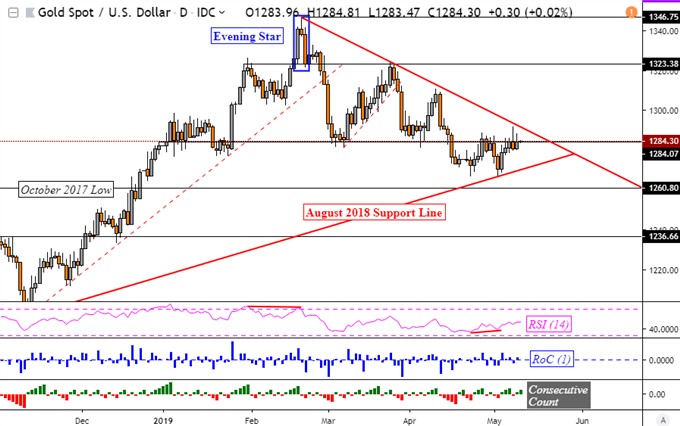