Gold prices lost upside momentum during the latter half of Wednesday’s trading session, erasing what could have been a solid day for the precious metal. Weakness could be found by looking at US front-end government bond yields which rallied alongside the S&P 500 as risk aversion cooled, arguably resulting in a better-than-expected day on Wall Street.

Gold, lacking interest-bearing qualities, thus lost its appeal as an anti-fiat asset. The somewhat upbeat mood in stocks could be traced to hopes of an outcome in US-China trade talks by Friday which have recently taken a turn for the worst. China’s delegation team, along with Vice Premier Lie He, are nevertheless scheduled to arrive in the US for negotiations.

Sentiment-linked crude oil prices, while rallying with the S&P 500, were little changed due to losses earlier in the day. Even an unexpected contraction in weekly EIA inventory flow (-3963k barrels versus +1112k expected) failed to offer the commodity enough upside support to pare prior declines.

Both the reaction in gold and crude oil prices could have been linked to the ongoing trade talks between the world’s largest economies which are a critical sticking point for general market mood. In fact, oil weakened in early Thursday trade alongside the Nikkei 225 as US President Donald Trump said that China ‘broke the deal’.

Tension and updates between the two economic powerhouses are clouding the fundamental background in the near-term due to the risk of a breakdown in talks. Still, keep an eye on a speech from Fed Chair Jerome Powell over the remaining 24 hours. He may reiterate the central bank’s more neutral stance which last week resulted in brief risk aversion.

Crude oil prices are sitting under the rising support line from late December, struggling to find momentum in either direction. A narrow falling channel from the middle from April seems to be keeping the downside bias though. Immediate support appears to be at 60.26, the former highs in March. Climbing higher places 64.54 as the next psychological barrier. 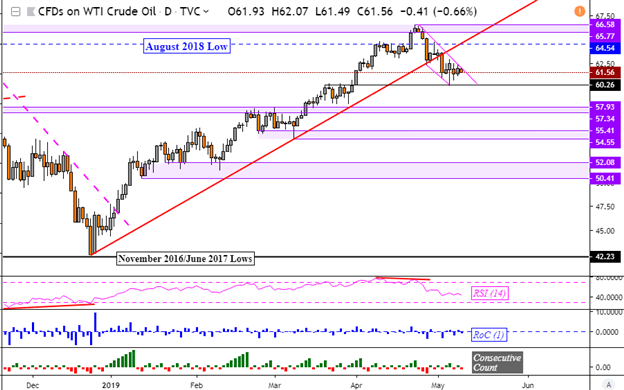 The pullback in gold prices left behind a large wick after testing the descending resistance line from February. Overall, gold’s downtrend remains intact since the bearish Evening Star from its peak just under 1346.75. But, it is running out of room to consolidate with the rising support line from August 2018 just below it. Every day of trading brings it closer to a breakout, be it up or down. 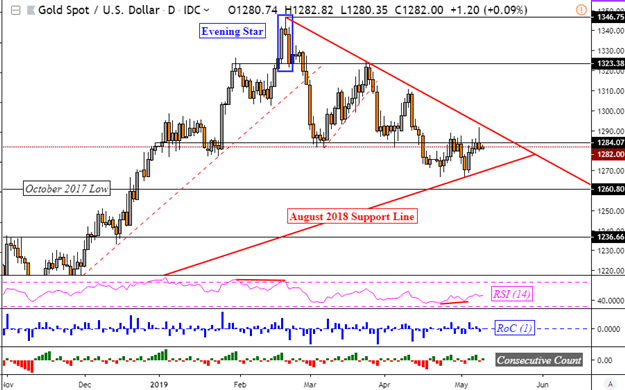