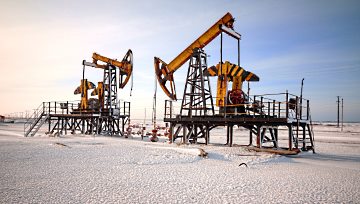 Gold and Crude Oil Prices May Give Up Gains From Syria, OPEC Lift

Crude oil prices rose more than two percent on Wednesday, climbing to the highest point since December 2014. The threat of a conflict between the US and Syria helped push prices higher despite EIA oil inventories increasing by the most since early March. Meanwhile, gold prices also rallied. However, some of the gains in the anti-fiat yellow metal were lost when the US Dollar rallied towards the end of the day.

We also had the second day of the International Energy Forum in New Delhi. There, OPEC’s Secretary General Mohammad Barkindo spoke and said that the group is confident that they “will get inventories to the 5-year average in 2018.” He added that the cartel sees compliance in March higher than in February.

Looking ahead, on Thursday OPEC will issue their monthly oil market report. Previously, the group had to reduce supply by more than anticipated thanks to a glut in non-OPEC production. Since Barkindo also mentioned that global inventories are about 42 million bbl above the 5-year average yesterday, perhaps additional adjustments could be in the cards. More cuts to the supply may boost oil prices.

In addition, keep an eye out for how the US chooses to respond to the Syria situation. President Donald Trump spoke to Defense Secretary Jim Mattis and they are still weighing options for military action. Both crude oil and gold prices could be left vulnerable to how the situation unfolds. If sentiment declines again and the US Dollar falls, gold prices may benefit.

Gold prices are trying to make progress to the upside, however the commodity has failed to close above the resistance line of a descending channel. Wednesday’s high also came close to testing the January high of 1,366.13. Negative RSI divergence also hints that prices may soon fall. From here, near-term support is at 1,340.94 which has acted as resistance in the past as well. A push below that exposes 1,323.65 which was an area gold struggled to fall through in late March/early April. 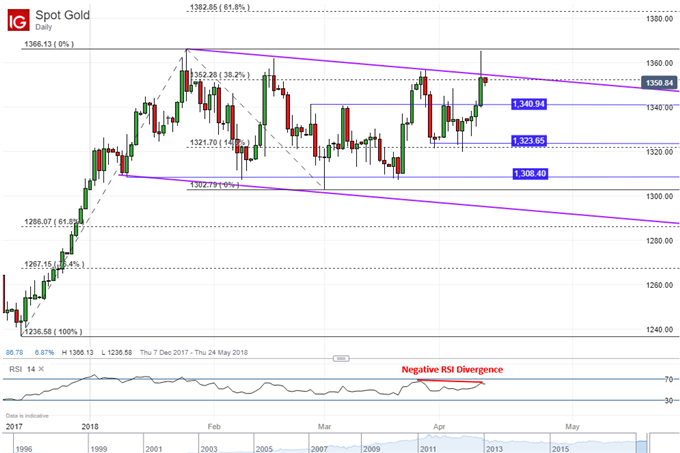 Unlike gold, crude oil prices closed above key resistance. That being the January 25th high of 66.60. However, like gold, negative RSI divergence is also present hinting momentum to the upside is ebbing. In addition, oil has not cleared the 38.2% Fibonacci extension at 67.33. From here the next target would be the 50% midpoint at 70.23. On the other hand, near-term support could be the January 25th high followed by the 23.6% level at 63.74. 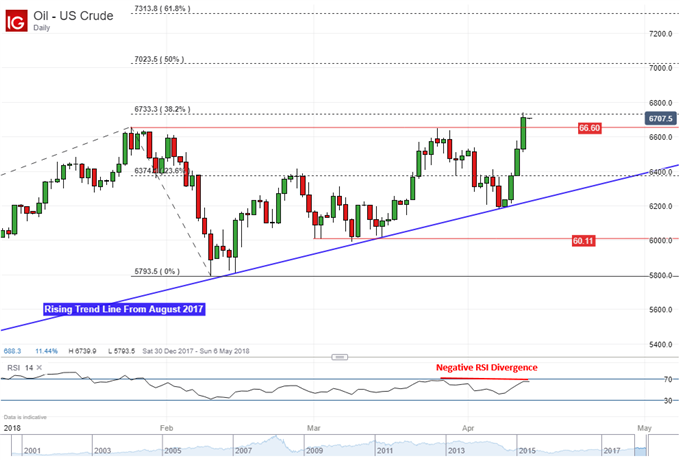