Gold prices came under pressure on Thursday as the US Dollar rose amidst a pickup in sentiment as trade war fears ebbed. Meanwhile, crude oil prices rose despite greenback’s strength. The main catalyst for oil’s climb was when Saudi Arabia unexpectedly increased the price of its Arab Light crude in Asia. Soon though, Thursday’s performance quickly reversed course.

Just as Friday’s session got started, US President Donald Trump ordered the consideration of $100 billion of additional tariffs on Chinese products. Sentiment immediately soured and oil prices fell while gold rose. Keep a close eye for further developments on this front and how US stocks react at market open.

Looking ahead, the anti-fiat yellow metal and oil also face March’s US jobs report. The country is expected to add fewer workers and the unemployment rate is expected to fall to 4.0%. Meanwhile, average hourly earnings are expected to rise. Data out of this country has been improving relative to economists’ expectations as of late. If an upside surprise boosts the greenback, gold and oil could fall.

In addition, crude oil faces Friday’s Baker Hughes rig count. The amount of active rigs have been steadily increasing from around 400 since mid-2016 to last week’s reported number of 993. Further additions could end up hurting oil prices as more extractions can increase the supply of crude.

Gold prices are slowly trying to make progress to the downside in an attempt to reach the lower line of the descending channel. However, near-term support has formed around 1,323.65 and pushing through that could be a challenge. From here, near-term resistance is around 1,340.94. A push higher exposes the upper line of the channel. If gold keeps falling and pushes lower, it will face the 38.2% Fibonacci retracement at 1,316.64. 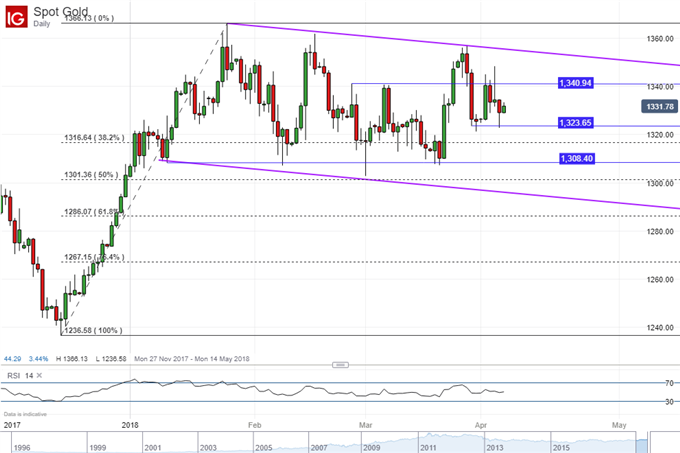 Crude oil prices are still being held up by the rising trend line from August 2017. However, in an attempt to test it, a new area of support seems to have formed around 62.85. From here, immediate resistance is the 23.6% Fibonacci extension at 63.74 followed by the January 25th high at 66.60. On the other hand, if prices fall through support the next target will be the series of lows seen in the first half of March around 60.05. 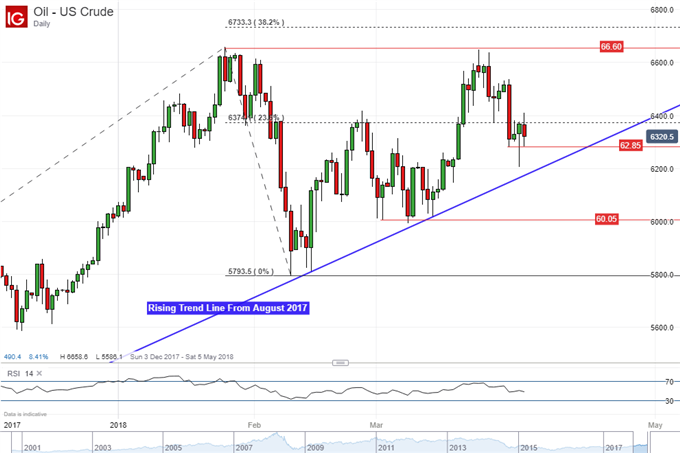