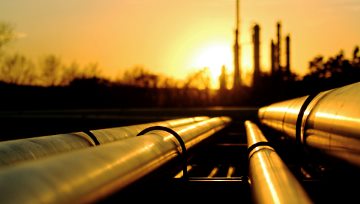 Crude oil prices shrugged off API data showing US inventories added 6.8 million barrels last week. Though the increase surpassed the 4.4 million barrel build expected from the official EIA data due later today, markets were seemingly well-primed for a build-up courtesy of refinery disruptions from Hurricane Harvey and took the result in stride. Rather, a corrective upswing saw the WTI benchmark drift higher after Friday’s plunge.

A rosy monthly report from the IEA seems to be offering oil a further lift. The agency upgraded its 2017 demand estimate to the highest since 2015, citing strong appetite from Europe and the US even as Chinese uptake slows. It also offered an encouraging assessment of OPEC-led production cut efforts, saying supplies outside the cartel fully complied with their share of output reduction for the first time.

The report seemed to tip the scales in oil’s favor after conflicting monthly estimates from the DOE and OPEC crossed the wires yesterday. The former lowered its demand projections while the latter nudged them upward. Barriers blocking upside follow-through appear to be relatively limited in the near term. It would probably take a dramatically large EIA build well in excess of API’s projection to deliver a turn-around.

Gold prices marked time as investors looked ahead to incoming US inflation data. PPI figures are set to show factory-gate price growth accelerated for the first in four months in August, hitting an on-year rate of 2.5 percent. An upside surprise echoing recently firming US news-flow might boost Fed rate hike bets and weigh on the yellow metal, though follow-through might have to wait for higher-profile CPI data due Thursday.

Sentiment trends may likewise emerge as a catalyst. S&P 500 futures are pointing lower, hinting risk appetite may cool a bit after two days of exuberant recovery. That might nudge Treasury yields lower, boosting the relative appeal of non-interest-bearing assets including the yellow metal. Incoming US CPI statistics may loom large here as well however, limiting volatility in benchmark lending rates.

Have a question about trading commodities? Join a Q&A webinar and ask it live!

CRUDE OIL TECHNICAL ANALYSIS – Crude oil prices continue to hover near trend line resistance capping gains since February. From here, a daily close below the September 11 low at 46.98 opens the door for a test of the August 31 bottom at 45.57. Alternatively, a break above the September 6 high at 49.39 – a move that would also take out trend line resistance – paves the way for a challenge of the August 1 top at 50.40.