Oil Drops On OPEC Uncertainty Whether To Extend Cuts

The price of Crude Oil looks to be aligning with the backwardation that recently came to pass where the front month futures contract was trading at a premium to futures contracts a few years out. A driver for the support of the Oil price has been a hope that OPEC would extend supply cuts beyond summer. However, on Tuesday, Suhail Al Mazrouei, UAE Minister of Energy cast doubt on the certainty that OPEC will extend cuts. Al Mazrouei said the level of inventories is dropping slower than expected, which is likely either to the aggressively supply from the US Shale or the lack of demand.

Signs out of CERAWeek in Houston appear promising for the future of the Oil market and those anticipating higher prices. Mohammed Barkindo, OPEC secretary-general, met with the heads of multiple oil production and oil service companies to discuss the demand for higher oil prices down the road with a balanced market with lower inventories being beneficial to everyone. However, the growth prospects ahead make a full-scale inventory and production pull-back difficult in practice, even if it sounds nice in theory.

The recent pick-up in the correlation of Gold with US Rates and US Dollar has not fared well for Gold. Gold futures on Tuesday posted the sixth straight decline for the longest such strength since November. Much of the decline in Gold has to do with the fear of holding an asset with no interest bearing rights as the Central Bank of the world’s reserve currency begins to raise rates and thus, the reference rate for tens of Trillions of dollars in loans.

Year-to-data, Spot gold is still up nearly 6%. However, for the upside to return for Gold, we would likely need to see a move lower in yields at the middle of the curve (5-10Yr). The easiest outcome that would bring this to pass would be an FOMC meeting to pass without a rate hike. Another risk the market is watching that is specifically displayed in EUR/XAU as the French Election in a few months down the road.

CRUDE OIL TECHNICAL ANALYSIS – Crude oil prices remain stuck in a narrow range, but the longer-term structure appears trend continuation. While there was excitement on the recent run to $55/bbl, it remains possible we are tracing out a larger bullish Triangle chart formation than previously anticipated that could take weeks, if not months to complete. Others are viewing this as a longer-term topping pattern before a new attempt at $20/bbl, though I do not take that view.

We will continue to favor the patient-longer-term Bullish view absent a move below Triangle top resistance-turned-support at 53.66 aims for trend line support doubling as the Triangle bottom, now at 52.31.A daily close above the 55.21-65 area (January 3 high, 38.2% Fibonacci expansion) targets the 50% level at 57.18 and quite possibly, higher. 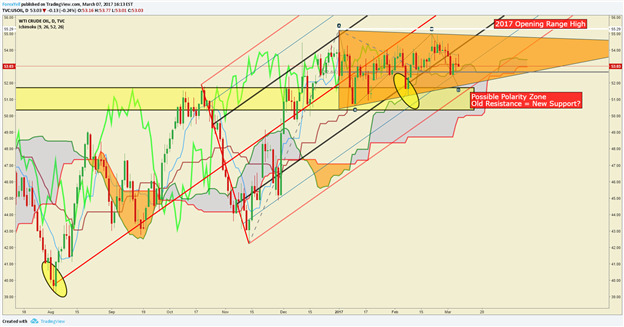