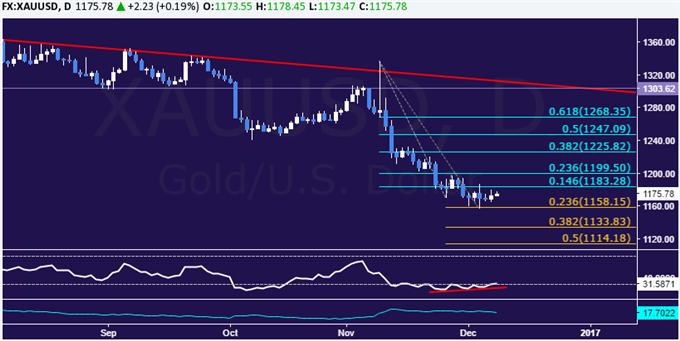 Crude oil prices continued to fall for a third day despite a larger-than-expected drawdown reported by the official EIA set of weekly inventory figures. Stockpiles shrank by 2.4 million barrels, a larger decline than the 1.4 million drop projected by economists and the 2.2 million decline foreshadowed by a private-sector estimate from API.

Absent a discrete catalyst, the move may reflect profit-taking on recent gains as elation following a last-minute OPEC supply cut deal dissipates. The breadth of non-OPEC participation remains unknown before a meeting of cartel members and other key producers this weekend. Meanwhile, an expected pickup in US output threatens to offset output restriction elsewhere.

Meanwhile, a lull in news-flow shaping Fed monetary policy bets has left gold prices mired in a narrow consolidation range. Fresh fodder will probably prove scarce before next week’s FOMC meeting. In the interim, traders may begin to worry that the Fed’s rates forecast will be more timid than that already priced in by markets, fueling a corrective bounce. Tightening expectations swelled after the US presidential election.

CRUDE OIL TECHNICAL ANALYSIS – Crude oil prices turned lower as expected after putting in a bearish Dark Cloud Cover candlestick pattern. From here, a daily close below the 38.2% Fibonacci retracement at 48.49 targets the 50% level at 47.28. Alternatively, a reversal above the 23.6% Fib at 49.98 exposes the 14.6% retracement at 50.90. 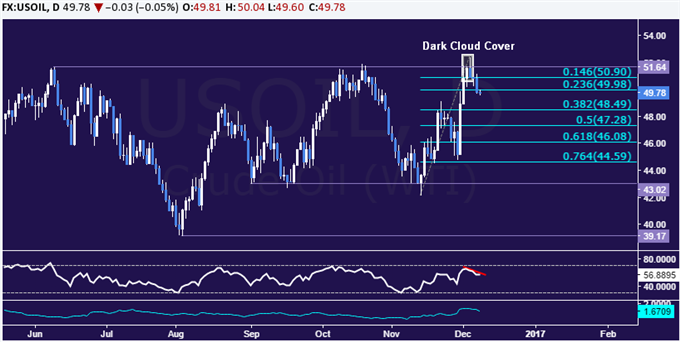