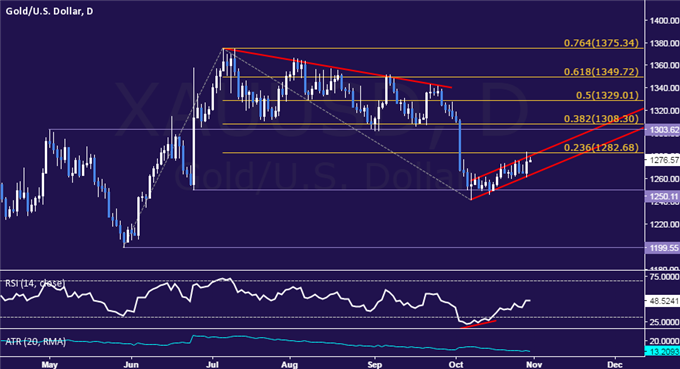 Crude oil prices fell amid signs of deadlock at a technical OPEC meeting in Vienna as the cartel tries to work out an implementation framework for an output reduction deal agreed in September. A sit-down with non-OPEC producers including Brazil and Russia also appeared to end fruitlessly. Risk aversion triggered after the FBI said it is investigating new emails involving Hillary Clinton compounded selling pressure.

Looking ahead, discord among OPEC member states may continue to weigh on oil prices as investors mark down the probability that a coherent supply management effort will practically materialize. Risk appetite looks to be on the mend as S&P 500 futures trade firmly higher. The FBI email investigation fiasco remains apotential source of headline risk however. Another risk-off push may punish the WTI contract.

Gold prices advanced as the US Dollar swung sharply lower into the end of Friday’s trading day, boosting demand for anti-fiat assets. The greenback succumbed to selling pressure as the FBI’s announcement crossed the wires, jolting investors’ baseline expectations for the US general election outcome just 11 days before voters head to the polls.

September’s US PCE report is in focus from here. The Fed’s favored price growth gauge is expected to show core inflation registered at 1.7 percent year-on-year last month, matching the two-year high set in August. An upbeat result may reinforce bets on a December rate hike and weigh against the yellow metal, although follow-through will probably prove limited ahead of this week’s FOMC announcement.

What to short-term crude oil and gold patterns hint about on-coming trends? Find out here!

CRUDE OIL TECHNICAL ANALYSIS – Crude oil prices continue to push lower having established a top above the $51/bbl figure, as expected. Near-term support is now at 47.04, the 38.2% Fibonacci retracement, with a break below that on a daily closing basis exposing the 50% level at 45.54. Alternatively, a reversal back above the 23.6% Fib at 48.90 targets the 14.6% retracement at 50.05. 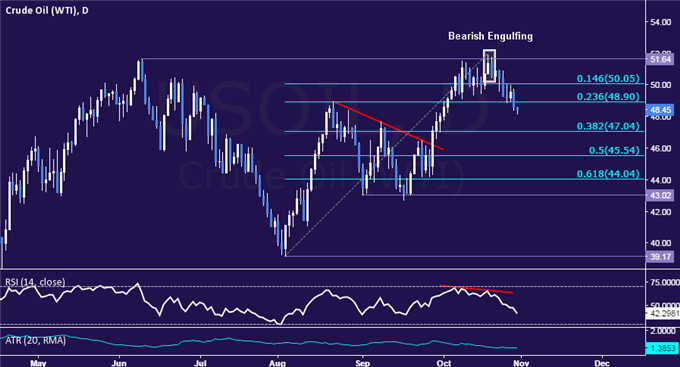