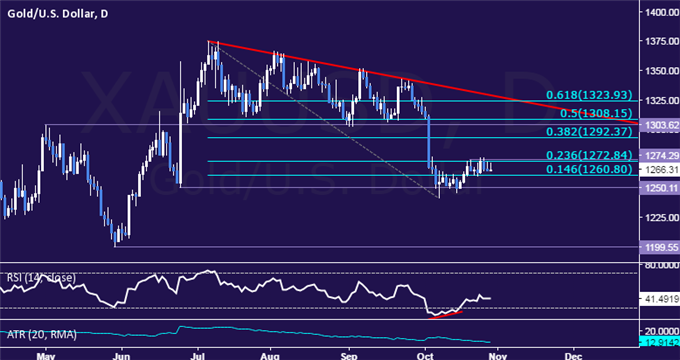 Gold Prices Mark Time as US GDP Data Looms Ahead

Gold prices are locked in consolidation mode as markets wait for third-quarter US GDP figures to inform Fed rate hike bets. The annualized growth rate is expected to rise to rise to 2.6 percent, the highest since the second quarter of last year. A downside surprise in line with a recent string of disappointments on US economic news-flow may trigger a dovish shift in priced-in policy bets, weighing on the US Dollar and pushing the yellow metal upward.

Crude oil prices edged narrowly higher amid reports that Brazil – the fastest-growing producer outside of OPEC – will join members of cartel and outside exporters including Russia for output freeze negotiations. The participation of non-OPEC oil suppliers is essential to the success of any price-boosting effort. The group’s own data – cited in a report from Bloomberg News – suggests it will be unable to meaningfully draw down an inventory glut alone.

OPEC officials are due to in Vienna to discuss the share of output reduction to be implemented by each member state as part of a deal struck in Algiers last month. Non-OPEC producers will meet with cartel representatives the following day to see if the many sides can find common ground, paving the way for operational details to be finalized at a meeting on November 30. Sideline commentary from the sit-down is set to emerge as a major driving force for prices into the week-end.

Where are gold and crude oil prices heading into the year-end? See our forecasts and find out!

CRUDE OIL TECHNICAL ANALYSIS – Crude oil prices continue to consolidate after reversing downward following a test resistance above the $51/bbl figure (as expected). From here, a daily close below the 23.6%Fibonacci retracement at 48.90 exposes the 38.2% level at 47.04. Alternatively, a move back above the14.6% Fibat 50.05 targets the June 9 top at 51.64. 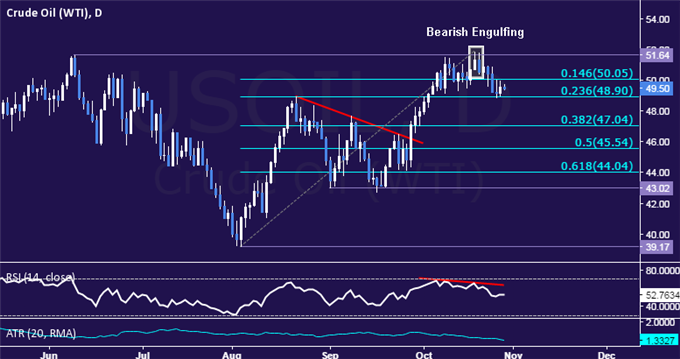