Crude Oil Prices fell further away from the June high of $51.64/bbl for a second day as doubts continue to creep in about whether or not OPEC will reach an agreement in November about how much and who of the 14-member OPEC group will cut. Adding to the pressure of the commodity bloc is the strengthening USD that is approaching February highs.

Gold prices traded at four-month lows on the back of a rising US Dollar as fears geopolitical fears have recently subsided, and September FOMC Minutes showed that the Fed is getting closer to a rate hike as December approaches. As of Wednesday, the market participants see the likelihood of a rate hike by the Fed in December near 67%.

The US Dollar will remain a critical factor for both Crude Oil and the price of Gold as USD strength tends to align with weakness in the commodity sector. The slope of the ascent in US Dollar from the September low is steep and has brought in a rise of ~3%. Traders will continue to watch for jawboning by Janet Yellen when she speaks on Friday after Retail Sales data.

Another metal in focus has been Dr. Copper, which has failed to push off the price support of $2.00m/t. Recent Chinese Yuan weakness and supporting data does may also be placing pressure on Copper. From a technical perspective, Copper appears to be finishing out a triangle consolidation. A break below 2.145 would open up a continuation of the downtrend and could be extended if USD strength continues.

GOLD TECHNICAL ANALYSIS – In two short weeks, the price of Gold has fallen by $100/oz. What has surprised many is that there feels to be little catalyst for the move aside from a strong USD in anticipation of a rate hike by the Federal Reserve before year-end. Price is sitting at the 38.2% retracement of the December-July range at 1,249, but a strong breakdown like we’ve seen over the last two weeks could quickly take us down to ~1,215 where we see the 50% retracement and uptrend support during Q216. 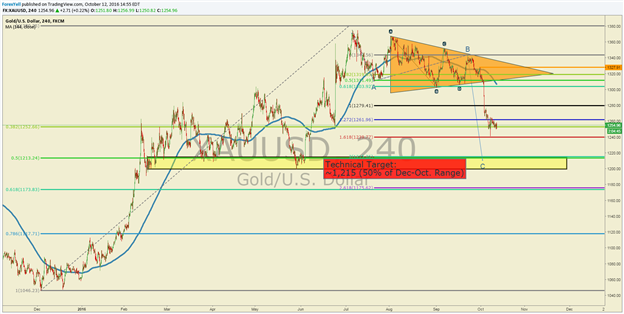 CRUDE OIL TECHNICAL ANALYSIS – Crude Oil prices have oscillated around $50/bbl on Tuesday, but may soon take over the June high of $51.64/bbl. Trendline support drawn from the February low and off the August low which should favor a Bullish bias until this trend line is broken. A shorter-term support level worth watching is Friday’s low at $49.12 that resulted in a Bullish Key Day. 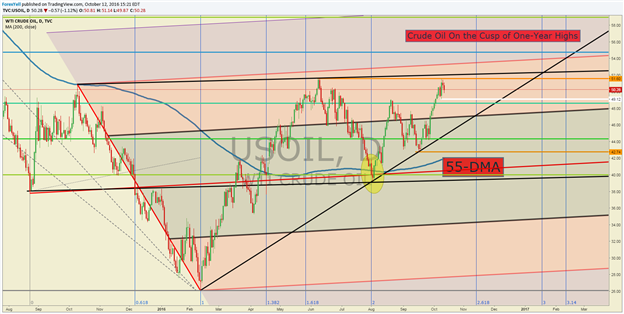