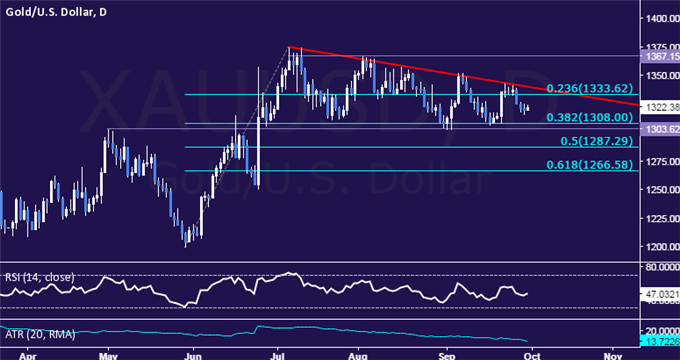 Crude oil continued to push higher after Russia signaled it is willing to cooperate with OPEC on managing global supply. Energy Minister Alexander Novak said his country will consider the cartel’s proposals after specifics emerge from its November meeting but added that his country intends to maintain output at current levels, a near-record high. OPEC surprised investors with the loose outlines for a production cut accord yesterday. Separately, Nigeria announced that it will be exempt from cutting output.

Gold prices bounced after touching a one-week low intraday to finish yesterday’s session little-changed after Bloomberg reported that about 10 hedge funds cut back their exposure to beleaguered German lender Deutsche Bank. The firm’s shares have suffered in recent days amid solvency concerns following a demand for $14 billion penalty by US regulators for MBS-related wrongdoing in the run-up to the 2008-09 financial crisis. Wobbly banks encourage demand for cash and alternative stores of value, including precious metals.

News of the funds’ exodus weighed heavily on US shares into closing bell on Wall Street. Risk aversion carried into Asian trade thereafter, with regional shares dropping 0.9 percent on average. European and US index futures are pointing sharply lower, hinting that sentiment may continue to sour in the hours ahead. This may offer support for gold prices as Deutsche shares open for trade in Germany. Crude oil may face a degree of selling pressure as haven flows boost the US Dollar.

On the data front, Augusts’ US PCE figures are in the spotlight. The Fed’s favored inflation gauge is expected to show the core inflation rate edged higher to 1.7 percent, the highest in at least six months. Taken as a standalone, an upbeat outcome might be expected to boost Fed rate bets, sending gold prices downward. This seems unlikely after filtering the event thought the prism of risk aversion however if DB-related jitters persist into the US session.

GOLD TECHNICAL ANALYSIS – Gold prices are making cautious progress downward but volatility (as measured by ATR) has dropped to the lowest in 14 months. Breaching support in the 1303.62-08.00 area (May 2 high, 38.2% Fibonacci retracement) on a daily closing basis exposes the 50% level at 1287.29. Alternatively, a move above trend line resistance at 1340.01 sees the next key barrier at 1367.15, a double top in play since early July. 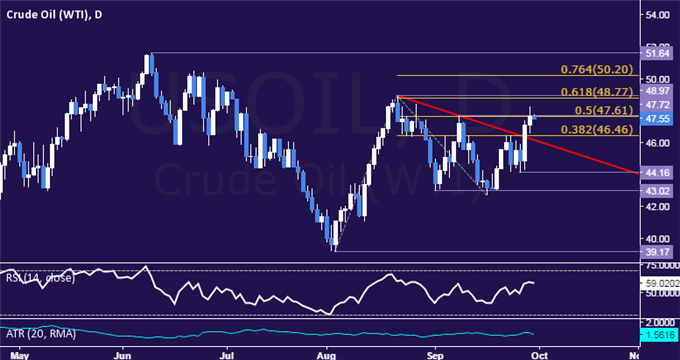