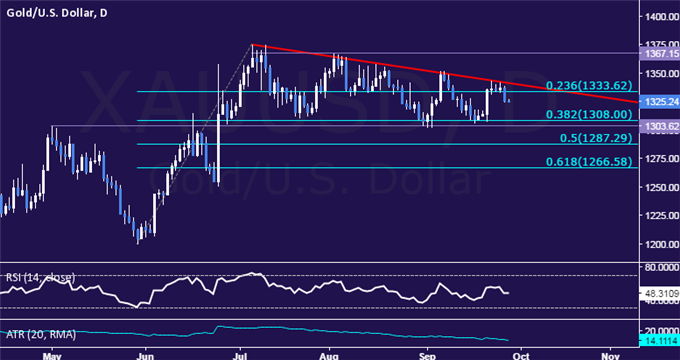 Gold prices plunged yesterday, falling alongside the TED spread measure of credit risk as shares in Deutsche Bank recovered after a steep intraday loss. The lender has faced heavy pressure recently amid fears that paying a $14 billion fine sought by US regulators will dangerously deplete the firm’s capital. Indeed, the IMF has said Deutsche is the single biggest source of systemic risk in the global banking system. The Euro fell alongside the yellow metal, seemingly reflecting a deflating premium on cash.

Deutsche shares gapped higher at the open of European trade in today, with gold and the common currency dutifully declining. Continued moderation opens the door for Fed policy speculation to re-enter the spotlight. Scheduled commentary from Chair Yellen as well as four regional branch Presidents (Bullard, Evans, Mester and George) is on the docket. A hawkish tone echoing Yellen’s near-promise of a December rate hike may boost the US Dollar, pressuring gold downward.

Crude oil prices appear to be waiting for guidance for from an informal OPEC meeting happening on the sidelines of the International Energy Forum (IEF) in Algiers before showing directional commitment. A flurry of comments from the sit-down seemed aimed at lowering investors’ expectations. Representatives from Saudi Arabia and Iran said the talks are “consultative” ahead of a formal OPEC summit in November.

The markets’ disappointment has been limited thus far, which may reflect moderating hopes for an accord over recent weeks or wistful hopes for a last-minute breakthrough as the IEF goes into its final day. If the latter proves to be the case, selling pressure may yet strengthen as cartel officials head home, leaving bulls empty-handed. Weekly EIA inventory data may offer a boost in the former scenario if expectations of a 2.4 million increase are bested. An estimate from API pointed to a 752k barrel draw yesterday. 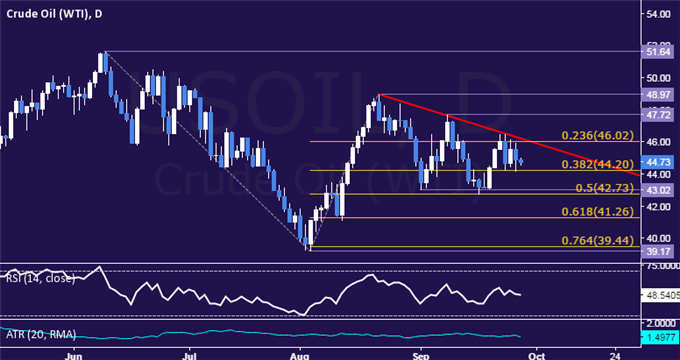