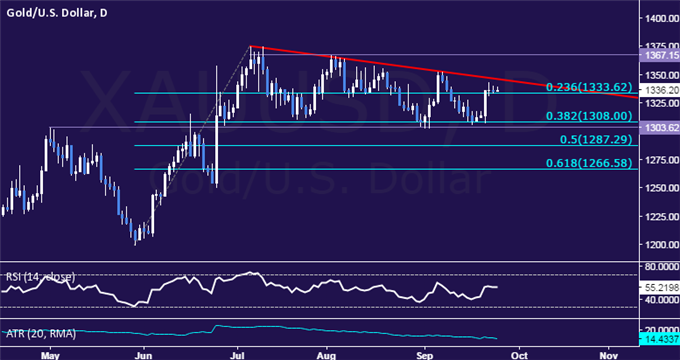 Crude oil prices plunged after news-wires reported that Saudi Arabia is not expecting a clear-cut decision on supply management to emerge out of this week’s much-anticipated informal OPEC meeting in Algiers on the sidelines of the International Energy Forum (IEF). Markets have speculated that the gathering may produce an accord to freeze or reduce output levels.

News-flow has been far from consistent however, with Algerian Energy Minister Noureddine Boutarfa claiming that the Saudi delegation offered to cut production to January levels if Iran reciprocated by capping output at the current setting. Separately, reports suggesting Russia will only join the sit-down if OPEC members arrive at an agreement amongst themselves.

Kneejerk volatility will probably continue through the middle of the week as IEF-related headlines stream over the wires. On balance, an output deal seems unlikely with Saudi Arabia and Iran unwilling to commit to anything that might help one another while the two countries are engaged on opposite sides of at least two proxy wars (in Syria and Yemen). This suggests the path of least resistance favors crude oil weakness.

Gold prices continue to mark time having struggled to find follow-through after last week’s FOMC-inspired rally (as expected). Selling pressure may re-emerge this week as a steady stream of commentary from Fed officials bolsters reinforces a hawkish posture from Chair Yellen, who all but promised tightening in December. Remarks from the central bank chief herself as well as eight regional branch Presidents, two Governors and Vice Chair Fischer are on the docket. 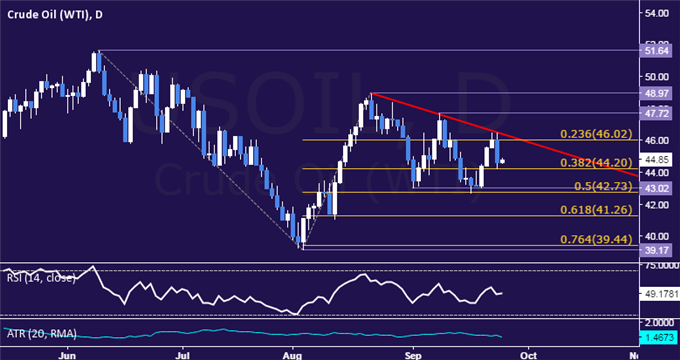