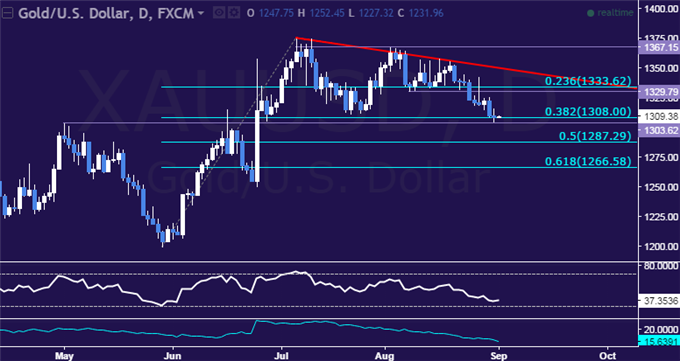 Crude Oil Drops Most in a Month as Inventories Swell

Crude oil prices plunged after EIA inventories data showed stockpiles grew by an unexpectedly large 2.28 million barrels last week. Economists were projecting a smaller gain of 825k barrels before the report crossed the wires. An estimate from API hinted at a larger-than-forecast build but the official outcome easily dwarfed that projection as well. The WTI contract found no lifeline in supportive comments from Saudi Energy Minister Khalid Al-Falih, who said the kingdom will boost output to capacity and flood the market.

Looking ahead, the Fed rate hike outlook remains in the spotlight as Augusts’ ISM Manufacturing report and scheduled commentary from Cleveland Fed President Loretta Mester cross the wires. US economic news-flow has cautiously improved relative to consensus forecasts over the past week, hinting at the possibility of an upside surprise. Such a result would be amplified if Mester follows fellow FOMC voter Rosengren, toeing the line established by Fed leadership last week. 3

An up-shift in tightening bets stands to boost the US Dollar and weigh on commodities in this scenario. Follow-on momentum may be limited however as traders withhold directional conviction ahead of the looming release of official US Employment figures on Friday.

Retail traders are net-long gold. Find out here what this hints about where prices are going.

CRUDE OIL TECHNICAL ANALYSIS – Crude oil prices continue to decline after carving out a top below the $49/bbl figure (as expected), posting the largest daily decline in a month. A daily close below the 50% Fibonacci retracement at 44.07targets the 61.8% level at 42.91. Alternatively, a move back above the 38.2% Fibat 45.22 exposes the 23.6% retracement at 46.65 anew. 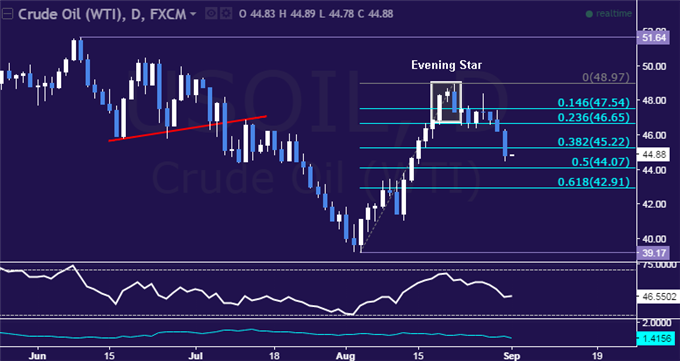