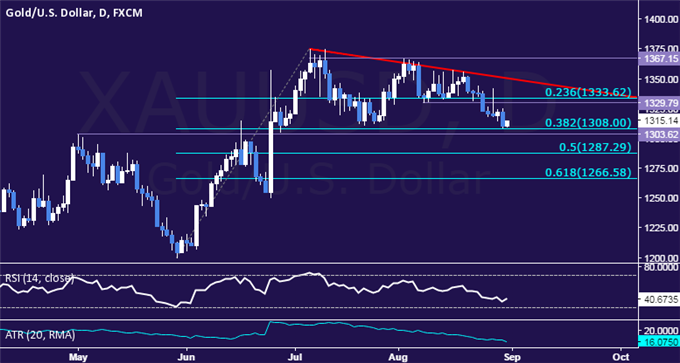 Gold prices dropped to the lowest level in two months as the US Dollar traded broadly higher against its major currency counterparts, sapping demand for anti-fiat assets. The greenback rallied after Fed Vice Chair Stanley Fischer doubled down on last week’s hawkish comments in an interview with Bloomberg TV, saying he doesn’t expect a “one and done” approach to rate hikes.

Looking ahead, Fed policy bets remain in focus. Comments from Eric Rosengren, Charles Evans and Neel Kashkari, Presidents of the central bank’s Boston, Chicago and Minneapolis branches respectively, are due to cross the wires. Augusts’ ADP Employment report is also on tap.

Officials’ commentary should offer a clue about the degree of consensus on hawkish sentiments voiced by Fischer and Chair Yellen in recent days. The ADP report has a dubious record of foreshadowing official jobs data due on Friday but markets may prove responsive nonetheless, particularly if the headline payrolls number deviates from expectations to a significant degree.

On balance, news-flow supportive of the latest up-shift in the priced in Fed rate hike path that offers continued support to the US Dollar seems likely to stoke selling pressure across much of the commodities space (although crude oil may carve out its own path as official EIA inventory data is released). Alternatively, outcomes casting doubt on the Fed’s ability to deliver tightening in the near term will probably prove supportive.

CRUDE OIL TECHNICAL ANALYSIS – Crude oil prices broke down out of a narrow consolidation range, hinting at continuation of the down move signaled by the formation of a bearish Evening Star candlestick pattern. Near-term support is now at 45.22, the 38.2% Fibonacci retracement, with a break below that exposing the 44.07-40 area (50% level, former support shelf). Alternatively, a reversal back above the 23.6% Fibat 46.65 sees the next upside barrier at 47.54, the 14.6% retracement. 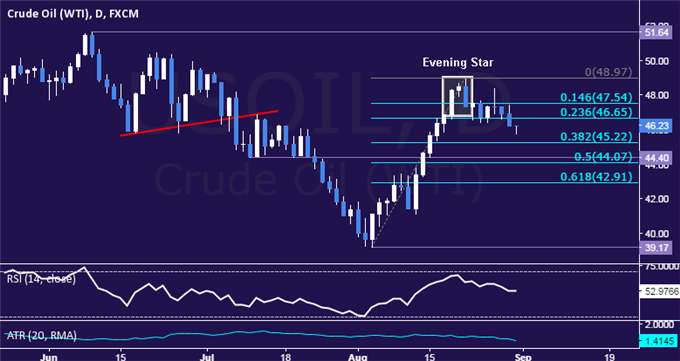