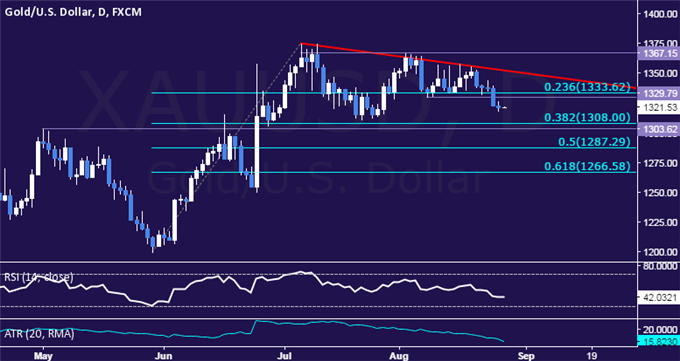 Crude oil prices bounced after state news reported that Iran Oil Minister Bijan Namdar Zanganeh would attend an informal OPEC meeting in Algiers next month. Separately, Saudi Arabia Energy Minister Khalid Al-Falih said an output freeze deal among producing countries would be “positive”. Hopes for a supply-side accord have been driving prices higher over the past two weeks.

A Reuters report claimed Iran may be amenable to an agreement earlier in the week but Iraq – OPEC’s second-largest producer – stoked skepticism, reaching a deal with Kurdish authorities to boost output out of Kirkuk. On balance, the likelihood that the meeting will produce something tangible seems remote considering three of the principal parties – Saudi Arabia, Iran and Russia – are currently on opposite of at least two active military conflicts.

Meanwhile, gold prices stalled as all eyes turn to a much-anticipated speech from Fed Chair Janet Yellenat the Jackson Hole Symposium. Markets appear to be positioning for a hawkish outcome. The priced-in probability of a rate hike before year-end implied in Fed Funds futures has conspicuously grown to 57.4 percent from 47.3 percent just a week ago. Confirmation of pre-positioning in the Fed chief’s rhetoric is likely to boost yields and the US Dollar, undermining demand for anti-fiat assets and pushing gold downward.

What do past crude oil and gold price patters hint about current price action? Find out here!

CRUDE OIL TECHNICAL ANALYSIS – Crude oil prices corrected higher but a bearish Evening Star candlestick pattern continues to hint a top has formed below the $49/bbl figure. A daily close below the 23.6% Fibonacci expansion at 46.02 targets the 44.20-40 area (July 11 low, 38.2% level). Alternatively, a push above the August 22 high at 48.97 that negates near-term bearish cues would expose the June 9 top at 51.64. 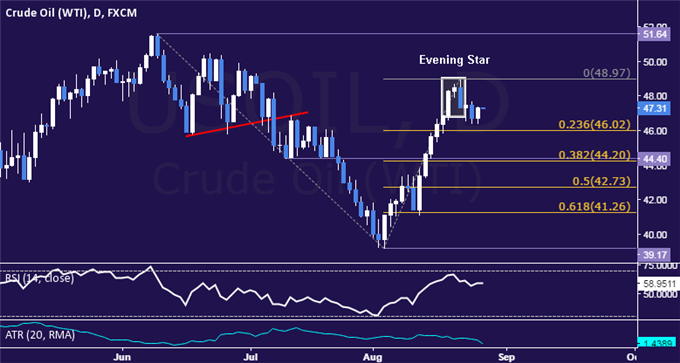