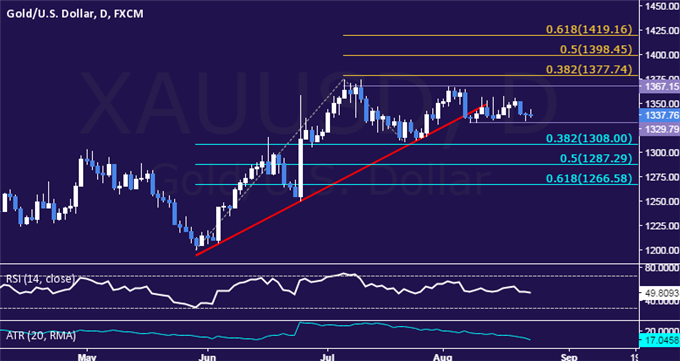 Crude oil prices oscillated in a wide range, torn between conflicting news-flow. On the upside, a Reuters report claimed that Iran may be amenable to a possible deal to boost prices at an informal OPEC meeting next month. On the downside, Iraq stoked fears that it would scuttle any such accord. Iraqi Oil Minister Jabbar al-Luaibi said “increasing oil production…will not be compromised” while Prime Minister Haider al-Abadi told reporters his country is not producing as much as it should be.

Looking ahead, weekly EIA crude oil inventory data is on tap. Consensus forecasts project a 495k barrel decline. However, a private-sector estimate from API suggested stockpiles rose by 4.46 million barrels last week. If this proves to foreshadow an unexpected build in the official report, the WTI contract may face renewed selling pressure.

Gold prices continued to tread water as traders waited for a much-anticipated speech from Fed Chair Janet Yellen before committing to a directional bias. The markets appear to be positioned for a relatively hawkish outcome, with the priced-in probability of a rate hike at the December policy meeting (as implied in Fed Funds futures) rising to 53.9 percent versus 51 percent last week and 45.1 percent a month ago. The metal appears reluctant to make meaningful direction progress absent confirmation however.

Are traders buying or selling gold? Find out here!

CRUDE OIL TECHNICAL ANALYSIS – Crude oil prices stalled having dropped to the lowest level in over a month. Still, the appearance of a bearish Evening Star candlestick pattern hints at potential topping. Near-term support is at 46.8, the 61.8% Fibonacci retracement, with a daily close below that targeting the 50% level at 45.41. Alternatively, a reversal above the 76.4% Fib at 48.70 exposes the June 9 high at 54.61. 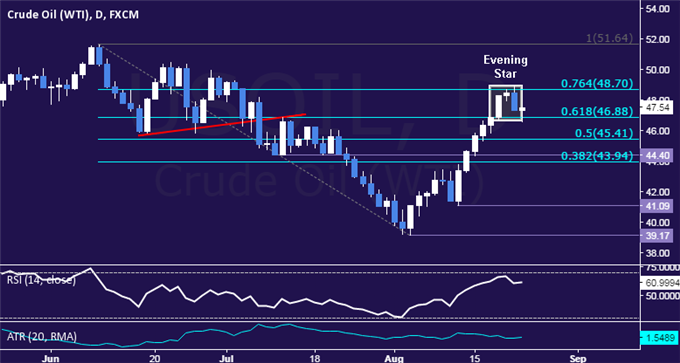