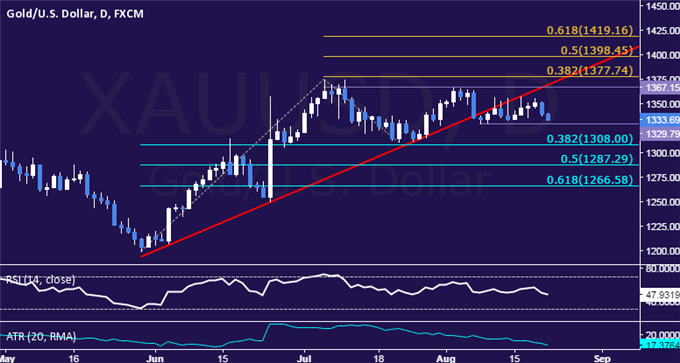 Gold prices retreated as US bond yields rose and the Dollar traded broadly higher amid swelling Fed rate hike speculation. The move precedes a much-anticipated speech from FOMC Chair Janet Yellen at the Jackson Hole Symposium this week. Bets on a hawkish posture emerged following a conspicuous about-face in rhetoric from San Francisco Fed President John Williams, whose pronouncements are closely monitored because the markets see him as Yellen’s close confidant.

Williams published a pointedly dovish essay early last week only to be swiftly countervailed by hawkish remarks from New York Fed President Bill Dudley just hours later. Traders took the split as emblematic of deadlock among FOMC officials that would probably delay tightening. Williams was painstakingly back-trackingby Thursday however, speaking almost as though he had been chastised to get back in line. He said he would prefer to hike rates “sooner rather than later” and even echoed Dudley’sworries about the markets’ under-pricing of rate hike probability.

Williams’ reversal appeared to warn that the Fed intends toughen up in the second half of the year, fueling bets that the annual gathering in Wyoming will mark a key inflection point for the US central bank once again. This narrative found a receptive audience in Asia at the beginning of the trading week and may continue to drive price action in the absence of a high-profile event risk on the economic data docket. Crude oil prices may also get pulled into the move as the USD-denominated WTI contract faces de-facto selling pressure, although hopes of an OPEC output deal have proven stubbornly resilient in recent weeks.

CRUDE OIL TECHNICAL ANALYSIS – Crude oil prices have extended their winning streak to seven consecutive sessions, marking the longest run of back-to-back gains in 17 months. Momentum has slowed a bit however, with Friday seeing the smallest gain in two weeks. From here, a daily close above the 76.4% Fibonacci retracementat 48.70 targets the June 9 high at 51.64. Alternatively, a turn below the 61.8% level at 46.88 exposes the 50% Fib at 45.41. 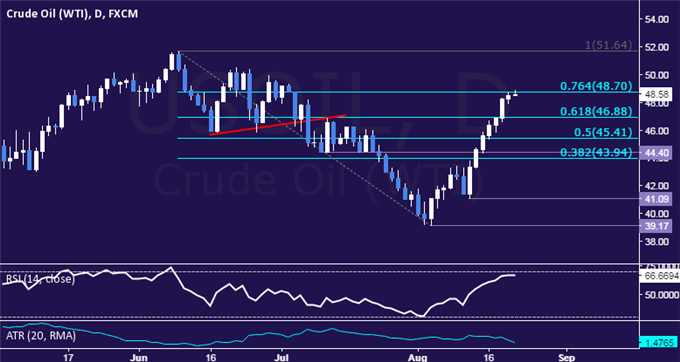