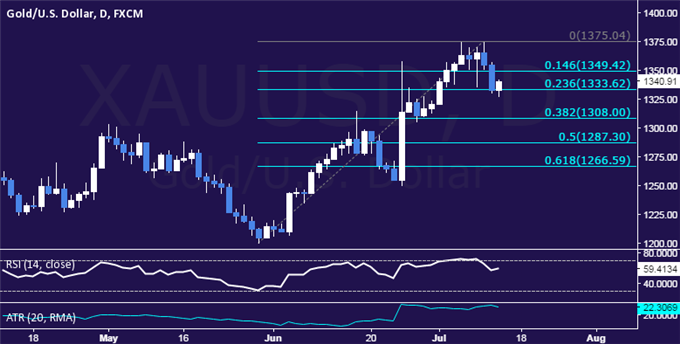 Commodity prices have been pulled into a market-wide correction after yesterday’s broad-based surge in risk appetite. Gold prices are rebounding following a steep decline while crude oil prices are edging lower having reclaimed a connection with sentiment trends to rally alongside share prices.

Optimism appeared to follow from an early end to contest for the UK Premiership as Theresa May moved to succeed the outgoing David Cameron in the aftermath of the Brexit referendum. Markets were preparing for a three-month contest but ended after just three weeks when Ms May’s last opponent dropped out.

Risk-off dynamics may carry forward in the hours ahead (see article). The appointment of a new PM does nothing in and of itself to lighten the load of Brexit’s implementation, undermining follow-through on yesterday’s momentum. The upcoming BOE rate decision may also discourage chasing risky assets higher.

A sentiment-inspired slump in the WTI contract may be compounded by weekly EIA inventories data. API data released yesterday showed US stocks added 2.2 million barrels last week. If this proves more accurate than forecasts calling for a 2.25 million drawdown in the EIA report, it may embolden sellers.

Will crude oil continue to recover in the third quarter? See our forecast here!

CRUDE OIL TECHNICAL ANALYSIS – Crude oil prices produced the largest daily advance in three months after finding support above the $44/bbl figure. From here, a daily close above the intersection of trend line resistance and the 14.6% Fibonacci expansion at 48.14 targets the 50.45-51.64 area (23.6% Fib, June 9 high). Alternatively, a reversal below the July 11 low at 44.40 exposes the 38.2% Fib retracement at 41.86. 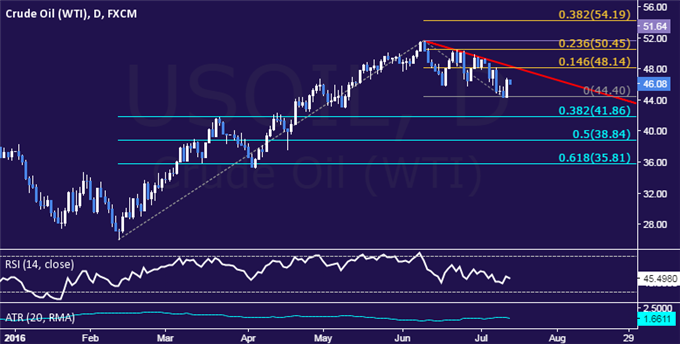