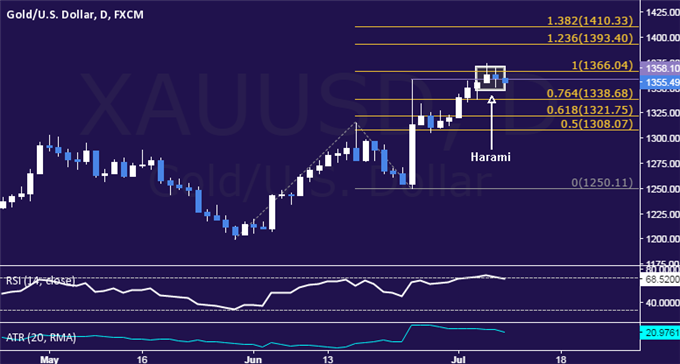 Crude Oil Prices May Rebound with Stocks on US Payrolls Data

Gold prices settled into quiet consolidation yesterday, mirroring standstill in risk sentiment trends (as tracked by the benchmark S&P 500 stock index). The lull likely reflects investors’ unwillingness to commit to a firm directional bias ahead of June’s US jobs report due to cross the wires Friday. Crude oil prices pushed through range support after weekly inventories data from the EIA showed a smaller drawdown than analysts projected (-2.2 million barrels vs. -2.5 million forecast).

The payrolls print is expected to show the US economy added 180,000 jobs in June. Besides the headline figure, traders will be keen to see if May’s abysmal payrolls number is revised upward and if the growth rate in average hourly earnings rises as expected. At 38k, the last jobs growth number marked a dramatic deviation from trend averages in the triple digits. On the wage inflation front, a reading of 2.7 percent year-on-year is expected to deliver the fastest wage inflation in seven years.

US economic news-flow has broadly improved relative to consensus forecasts since mid-May (disappointing labor-market data notwithstanding). This hints that analysts’ models may be underestimating the overall health of the economy and opens the door for an upside surprise. Such an outcome may feed hopes that strong US performance may be a potent countervailing force to malaise in Europe following the “Brexit” referendum, boosting risk appetite.

The WTI contract continues to exhibit a significant correlation with stock prices, hinting that crude oil prices may rise in a risk-on environment. Meanwhile, gold may track lower as capital pours out of safe-haven assets including US Treasury bonds. That will probably pressure yields higher, undermining the appeal of non-interest-bearing assets including the yellow metal.

Are traders buying or selling gold & crude oil ahead of US jobs data? Find out here!

CRUDE OIL TECHNICAL ANALYSIS – Crude oil prices broke below monthly range support at 45.60, the 23.6% Fibonacci retracement. From here, sellers aim to challenge the 38.2% level at 41.86. The 45.60 level has been recast as resistance, with a move back above that eyeing the next upside barrier at a falling trend line set from early June (now at 48.98). 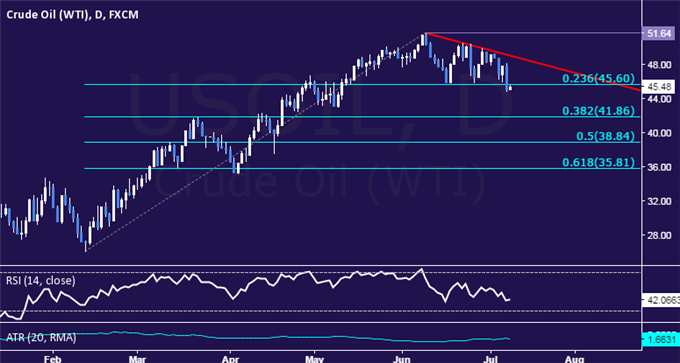