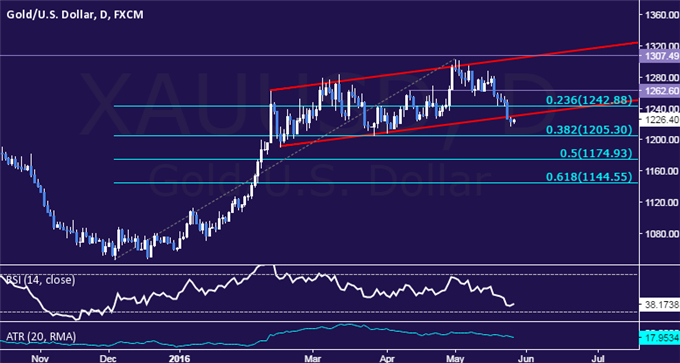 Looking ahead, US economic data and Fed-speak are once again in focus. The Durable Goods Orders report is expected to show an increase of 0.5 percent in April compared with a 1.3 percent gain in the prior month. US economic news-flow has increasingly improved relative to consensus forecasts over the past two weeks, opening the door for an upside surprise.

Comments from Fed Governor Jerome Powell take top billing on the speaking schedule. Members of the Governing Board outside of Chair Yellen and Vice Chair Fischer have seemed visibly more dovish than Presidents of regional Fed branches in recent months. If Mr. Powell’s remarks mirror the recent hawkish shift the central bank’s communication, traders may read this as a sign of firming agreement on near-term rate hike resumption.

Taken together, upbeat data and saber-rattling from the Fed are likely to make for another inward shift on the markets’ expected timeline for stimulus withdrawal. That such an outcome would be negative for gold prices seems relatively straight-forward. The implications for crude oil seem more clouded considering sentiment’s inconsistent relationship with policy bets, though a US Dollar rally on the back of an improved rates outlook may deliver de-facto selling pressure.

What does retail traders’ gold positioning say about where prices are going? Find out here!

GOLD TECHNICAL ANALYSIS – Gold prices continue to face selling pressure, falling for a sixth consecutive session. Breaking below the 38.2% Fibonacci retracementat 1205.30 on a daily closing basis targets the 50% level at 1174.93. Alternatively, a move back above channel floor support-turned-resistance at 1229.91 sees the next upside barrier at 1242.88, the 23.6% retracement. 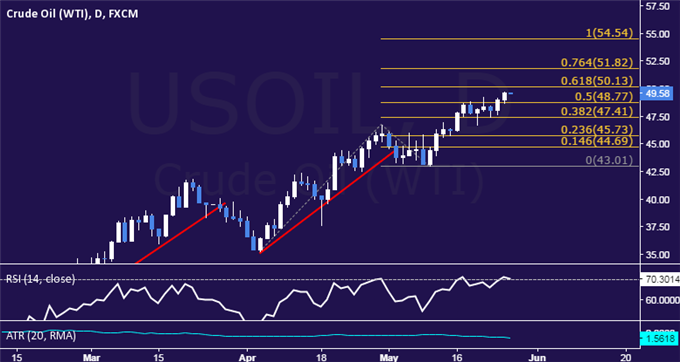