Crude oil prices rose to a seven-month high, with the WTI contract claiming a foothold above the $48/bbl figure after a private-sector estimate from API showed inventories fell by 1.14 million barrels last week. Newswires likewise pointed to continued supply disruption in Canada as a catalyst, noting that wildfires forced Suncor Energy to evacuate three sites it was aiming to restart.

Meanwhile, gold prices failed to find a lasting catalyst in US CPI data. Prices initially rose after the release registered in line with expectations, seemingly offering nothing to discourage the markets dovish Fed policy outlook. This would soon change however as hawkish comments from San Francisco and Atlanta Fed Presidents John Williams and Dennis Lockhart crossed the wires. The markets took notice, with gold retreating as the priced-in probability of a June rate hike tripled from 4 to 12 percent.

Looking ahead, the spotlight turns to the release of minutes from April’s FOMC policy meeting. The statement released following the sit-down conspicuously de-emphasized external headwinds highlighted in March. Subsequent comments from central bank officials (including the aforementioned remarks from Lockhart and Williams) stressed that the markets are underestimating the degree of tightening likely on tap this year.

A similar tone in the Minutes document may stoke rate hike expectations further, punishing gold. It may likewise undermine risk appetite as traders are forced to re-price the extent of near-term stimulus withdrawal. Indeed, hawkish shift in futures-implied policy bets played out in tandem with a drop in US share prices. A risk-off mood may bode ill for sentiment-linked oil prices, although the official set of weekly EIA inventory numbers may complicate price action. A drawdown of 3.14 million barrels is expected. 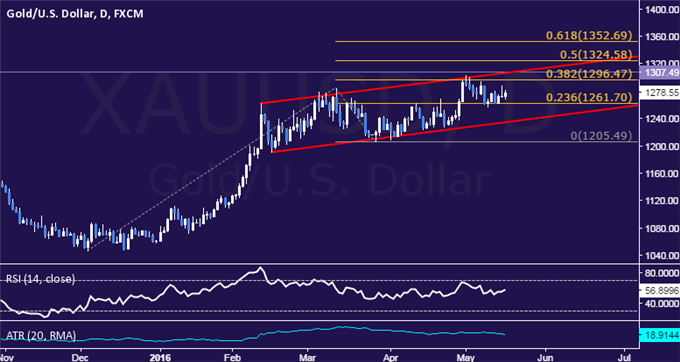 CRUDE OIL TECHNICAL ANALYSIS – Crude oil prices moved higher for a second consecutive day, hitting the highest level in seven months. From here, a daily close above the 50% Fibonacci expansion at 45.77 targets the 61.8% level at 50.13. Alternatively, a reversal back below the 38.2% Fib at 47.41 sees the next downside barrier at 45.73, the 23.6% expansion. 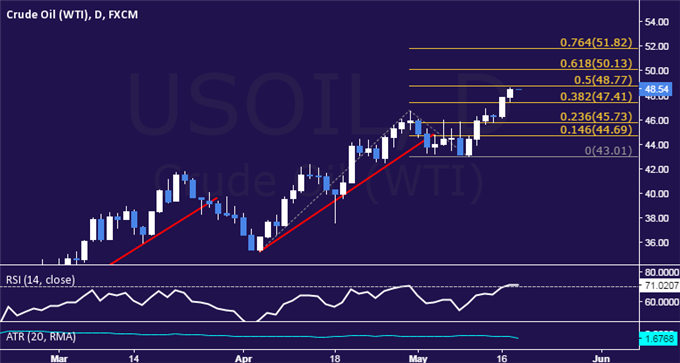