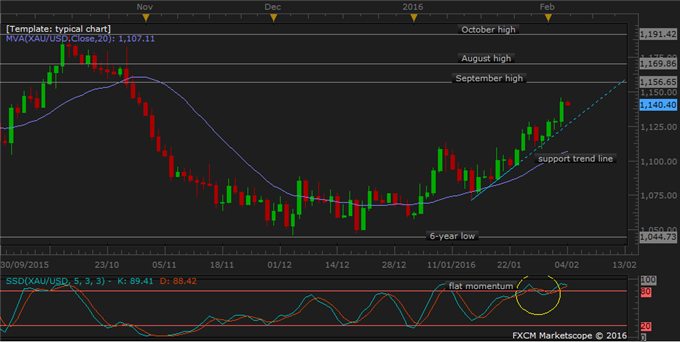 Gold and Copper Charge Ahead as Oil Rebounds to Weak USD

Oil price rallied 11.5 percent to erase all losses in the past 2 days, in spite of a 7.792 million barrels build reported by Department of Energy’s EIA. This was likely triggered by a slump in the USD following dovish Fedspeak and the lowest ISM non-manufacturing data since February 2014.

Although lower than previous stockpile, this week’s figure nearly doubled the 3.7 million barrels expected and induced a brief dip in WTI below $30. When the current fierce rebound subsides, supply outlook would resurface to lead a drag lower, as well as slowing demand forecasted by EIA yesterday.

Gold price surged above 1140 as the US dollar index DXY lost around 2 percent. Fixed income assets, the alternative safe haven bets, retreated today after yesterday’s jump. Hence gold may follow suit to stabilize in its current range. In Asia Pacific, JPY and gold have moved in tandem therefore bullion traders could also take cue from upcoming development in the yen.

GOLD TECHNICAL ANALYSIS – Gold price persistently climbed back up toward August and October highs, which characterized the last second-half year’s peak and trough. Support trend line holds firmly on the downside. At top, gold is heading to September’s high at 1156.6, followed by August’s high at 1169.8, then October’s high at 1191.4.

COPPER TECHNICAL ANALYSIS – Copper conforms to a support trend line on its way up with little chance of downward reversal. The metal steadily progresses toward a firm resistance at 2.1485. It is good sign for the bulls who entered trades near the multi-year low. However upside potential from here on may be limited by the resistance level. 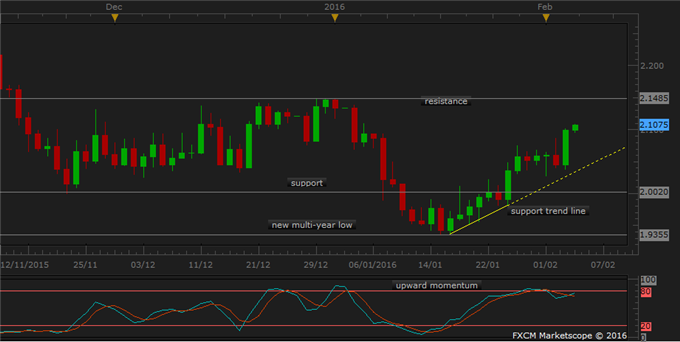 CRUDE OIL TECHNICAL ANALYSIS – WTI oil price is going through volatile trading as it bounced up and down under 34.25 resistance. The resistance will likely hold in the short term, putting a cap on future oil gains. Opportunities may arise for intraday trades alongside fickle market sentiment. 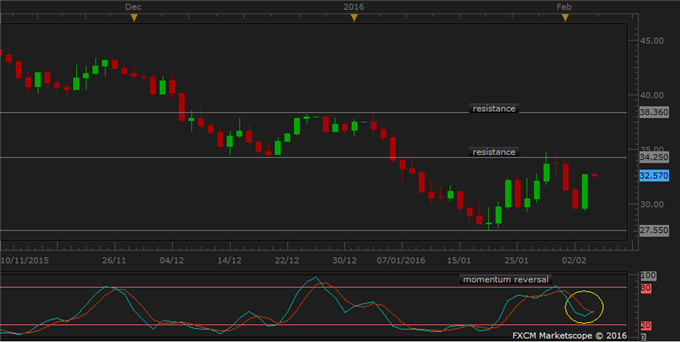