Asia set for another heavy selling round of risk assets including commodities, shares, and AUD, after People’s Bank of China fixed the yuan midpoint at a fresh 5-year low. China’s CSI 300 stock index plunged over 7 percent and triggered a halt in all Chinese stock exchanges for the day.

Gold price rallied on a 5th consecutive day to the highest since November 6 as safe haven buying brought it up to 1102.85 following yesterday’s global stock rout and Chinese yuan devaluation. A slightly dovish December minutes from the Fed has not shown much affect though it is supposed to be gold-supportive. Current high level may be today’s top for bullion as it was support level during a September dip.

Oil price slumped another 2.5 percent to 32.77 today amid Asian risk selling, after it settled yesterday’s session at the lowest since 2009. Statistics from Department of Energy showed the biggest gasoline build in 23 years, although this was probably skewed by year-end period. In line with previous API data, crude stocks fell by 5.1 million barrels while Cushing inventories rose. This and the near-parity WTI-Brent spread indicates growing weakness in oil price.

Geopolitical tension between Saudi-Iran that led several Middle Eastern countries to cut diplomatic ties with Iran has failed to rescue oil prices. Support level is now the 2008 low of 32.40.

Copper price bounced back to 2.06 region after a daily low of 2.0545 due to a record low fix of Chinese yuan. The metal was surprisingly resilient despite a halt in Chinese exchanges and a 7 percent drop in Shanghai stocks today. While oil bears the brunt of a commodity sell-off given weak fundamentals, copper’s downside could be contained somewhat thank to miners’ production cuts.

GOLD TECHNICAL ANALYSIS – Gold price is heading to a past support- now turn into resistance at 11104.4. Moving averages display early sign of an uptrend, although consistent upward momentum would be required for it to play out. Failure to break resistance will provide opportunities for range traders. 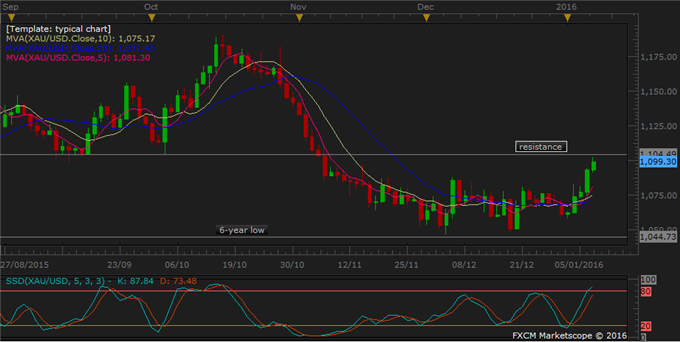 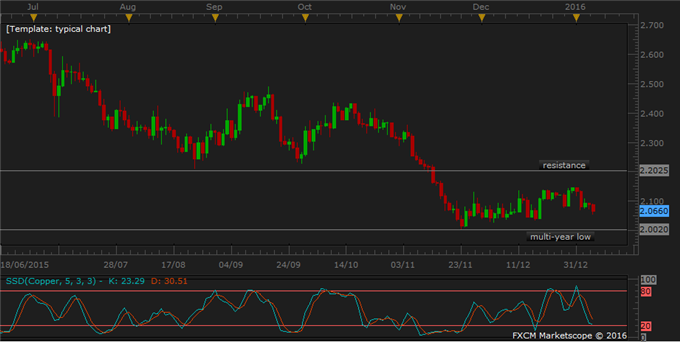 CRUDE OIL TECHNICAL ANALYSIS – WTI oil price extended losses near the low of 2008 on a 4th day of free fall. Despite being around the lower bound, momentum signals has strengthened again. Lower moves are possible, and the bears could look to 5-year moving average to trail their stops. 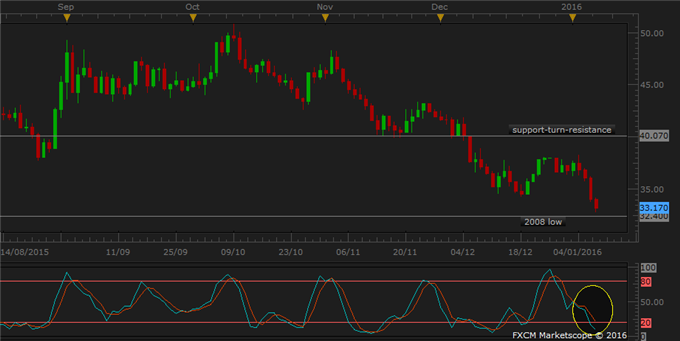