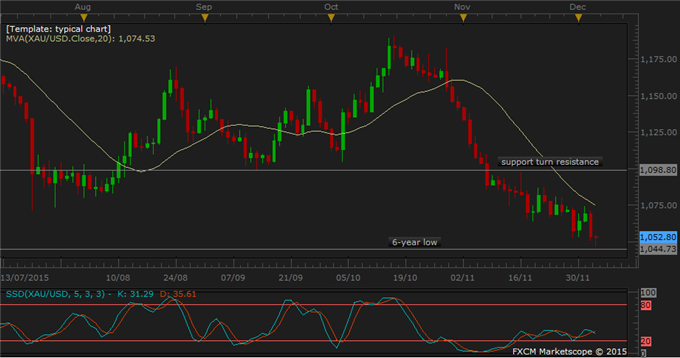 Oil price picked up from a fresh 6-year low at 39.84 following news of Saudi Arabia’s change of heart to support OPEC output cuts. The country was quoted to propose cuts of 1 million barrels a day per Energy Intelligence. Both WTI and Brent crude prices have scored around 1.5 percent gain in the Asian afternoon.

Oil price may continue choppy trading up to and during OPEC’s meeting on December 4. Overnight, Iran’s comment that ‘the majority of OPEC members agreed on output cuts’ sent WTI oil soaring to 41.97. However it immediately plummeted 5 percent to this new 6-year low at talks that Saudi opposed to cuts.

Gold price stabilized around 1050s region after falling from 1067 to 1046.44 since the New York session, upon a rather hawkish speech by Fed Chair Yellen. She noticed rate hike path to be dependent on real inflation rather than projection. This in turn implied an early commencement and a gradual trajectory.

Safe haven assets like gold may get a reprieve if the European Central Bank delivers on market’s expectation of additional stimulus in today’s meeting.

Copper price dropped to 2.03 region, paring all gains in the last two sessions as US dollar rose ahead of ECB meeting today and key US data Nonfarm Payrolls on Friday. The metal found little relief from Chinese smelters’ production cuts, as demand prospect remained bleak. Higher USD extensions may send copper to test the multi-year low at 2.0020 again.

GOLD TECHNICAL ANALYSIS – Gold slipped to the lowest since March 2010 after it broke through a previous 6-year low. Momentum tendency still leans on the downside and gold may descend to new multi-year lows as event risk unfolds this week. The bears could leave stop trailing 20-day moving average.

COPPER TECHNICAL ANALYSIS – Copper barely held on to the upper 2.0200 region, above its multi-year low at 2.0020. Lower moves are to come, as momentum signals display clear downward pressure. The metal remains fragile on the downside until momentum may reverse. This record low stays at risk. 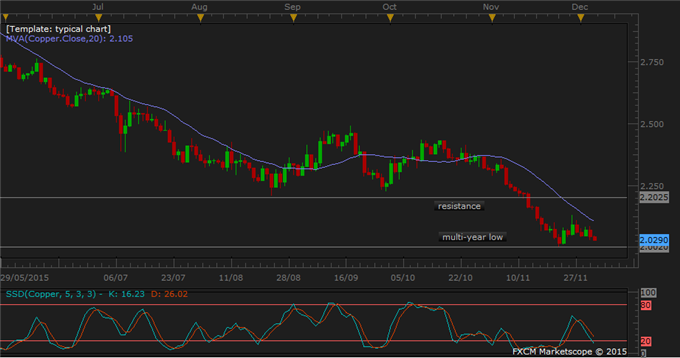 CRUDE OIL TECHNICAL ANALYSIS – WTI oil bounced back from the 40.07 long-term support level today. As we expected in yesterday’s research, momentum signals have also rebounded from lower bound of range. This provides a lift to oil price and offer some hope to the bulls who are eyeing the 43.46 range top. 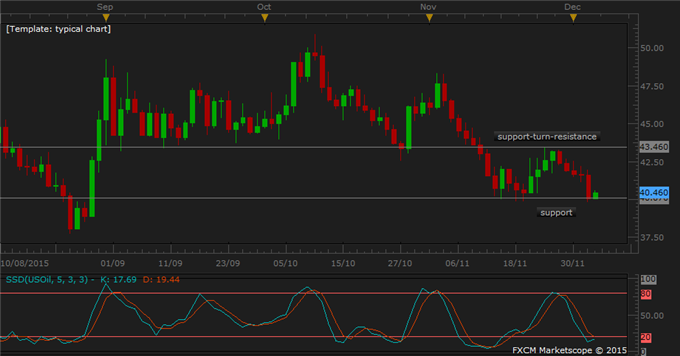