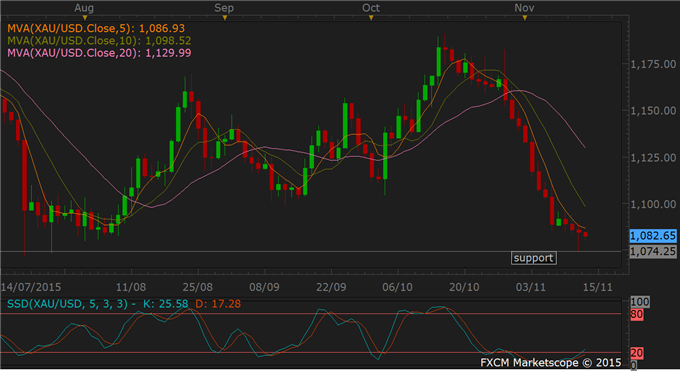 Metal market took a hit overnight under the combined pressure of US rate lift-off and China’s credit slump, while oil suffered from official stock build data. Palladium lost 6.7 percent in spot or 3.1 percent on COMEX, copper and nickel each lost around 2.5 percent on London Metal Exchange. The down fall dragged down shares of metal producers and commodity indices.

Gold has recovered up to 1085.56, a previous support-turned-resistance, after it collapsed to the lowest since February 2010 at 1074.25. Decent US job data and rather hawkish comments from Fed members Dudley, Lacker and Bullard support a rate lift-off, which curbs gold’s appeal as it does not yield interest like other assets.

There is no stopping to the oil slump as it lingers at 41.38 in Asia - daily low on August 21 and the second lowest price on record. Official data from U.S. Department of Energy confirmed a stock build that was signaled by API’s report on Tuesday. The U.S. high inventories are exacerbated by incoming cargoes and resilient shale output – even as producers continued to shut the less effective rigs.

Copper continued a free fall to establish a new 6-year low at 2.1530 in the afternoon Asia, progressively lower from overnight record. This is the 5th weekly drop and the longest stretch since August. China’s October aggregate financing (published by the central bank late Thursday) fell to a 15-month low, a sign that 6 interest rate cuts this year were not enough to revamp borrowing. This tepid new loans growth indicates slowing factory activities, thus weak demand for copper.

GOLD TECHNICAL ANALYSIS – Gold steadied above 5-year low of 1074.25 in Asia’s trade and will likely finish a fourth week of sharp declines. Moving averages display strong downtrend signal, although the pace could slow down together with an upturn in momentum. A correction may follow if prices fail to break below support level next week.

COPPER TECHNICAL ANALYSIS – The weekly chart shows copper establishing new 6-year low during Asia’s trade today, a rare occasion given the usually low volume in this time zone compare with London. There are not enough technical signs to indicate next support levels of copper other than the 2.1500 handle. Good news for the bears and resistance remains at 20-day moving average at 2.367 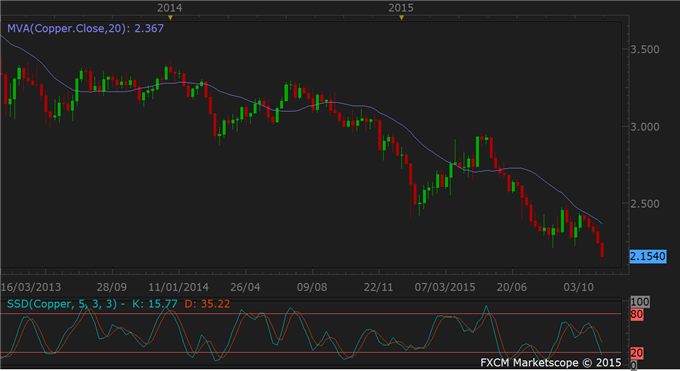 CRUDE OIL TECHNICAL ANALYSIS – WTI oil lingers at 41.38, the lowest since August 21, while lower moves loom in the horizon. Momentum has not yet bottomed out hence attention remains on the downside for oil. The bears may look to 5-day moving average as resistance level to trail their stops. 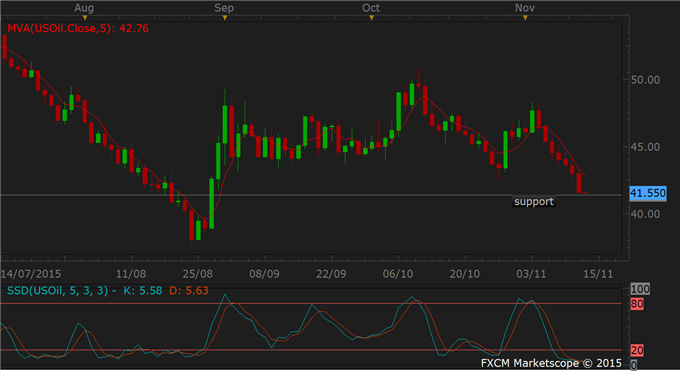