A firmer than expected Caixin China Manufacturing Purchasing Manager Index (PMI) triggered moderate buying of risk assets at the beginning of the Asia week. Although in contraction zone below the 50 division line, it surpassed both prior number at 47.2 and the forecasted 47.6. This helped to sustain risk assets including commodities and commodity currencies, after official PMI reading by the National Bureau of Statistics on Sunday missed forecast at 50.

Copper has been on the mend since Asia open and sets to return to the overnight trading range at the middle of 2.31s region. Upward momentum in copper and the Shanghai Composite index waned shortly after the Caixin reading, thus copper lingers near October low although its decline was trimmed to the lowest in a month.

Though not strong enough to spur bullish bets, the PMI readings eased bearish sentiment on industrial metals. If demand stabilizes during the fourth quarter, there may be chance for a pick-up in the first half of next year. Nickel and lead rose on the London Metal Exchange.

Gold headed on a fourth day of steep declines after the Fed confirmed the possibility of a 2015 rate hike in its October meeting. Gold has focused on the upside today as tepid China’s factory growth gauge brought about safe haven bets. A support comes at Friday’s low and 50% Fibonacci around 1133.3.

Oil traded in a tight range after three days of increases. China PMI readings failed to prop it up to another higher day. On Friday, crude oil advanced after active rig count tumbled to a five-year low, another sign that US producers are cutting investment in the face of low oil prices. Baker Hughes recorded a drop of 16 rigs, adding to the 81 cut during last two months.

In contrast, gasoline reached a two-week high at 138.81 on NYMEX in the previous session due to a large drop in stocks. This led to gains in oil-refined products and, coupled with high refinery operating rate, may help to ease the oil glut with crude consumption down the line.

GOLD TECHNICAL ANALYSIS – Gold is descending toward a trend line support and 50% Fibo around 1133.3. Although downward momentum exists, these support levels should hinder the pace of decline and provide indicators for the bears to trail stop loss. There is no signs for a return to upward moves yet, hence the bearish trade prevails. 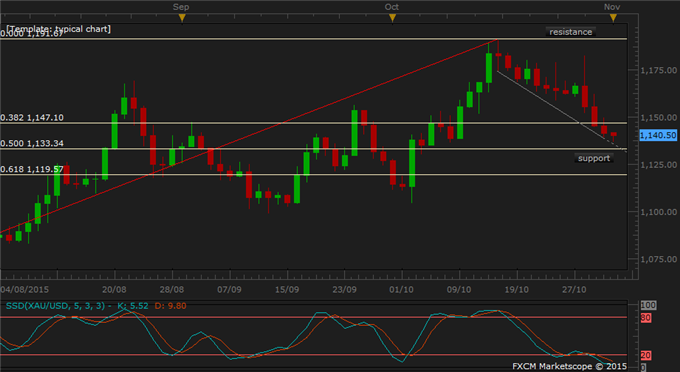 COPPER TECHNICAL ANALYSIS – Copper declined on a third day with clear downtrend signal in moving averages and momentum indicators. Support comes at 2.2730 which held for various days during a trough in September. Lower moves are in store although the bears should exercise caution if copper repeatedly tests but fails to breach support. 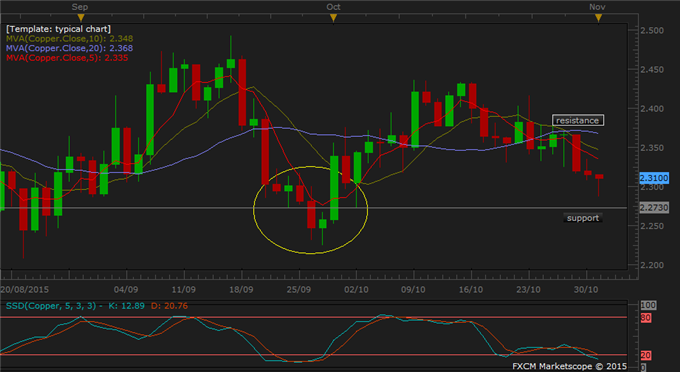 CRUDE OIL TECHNICAL ANALYSIS – Oil stuck in lackluster trading after a spike to weekly high on Friday. A recurring resistance and double top formed at 46.79. Support remains at 45.37 which generally held throughout the rally late last week. Official data from EIA is in two days and oil may remain stuck in range until then. 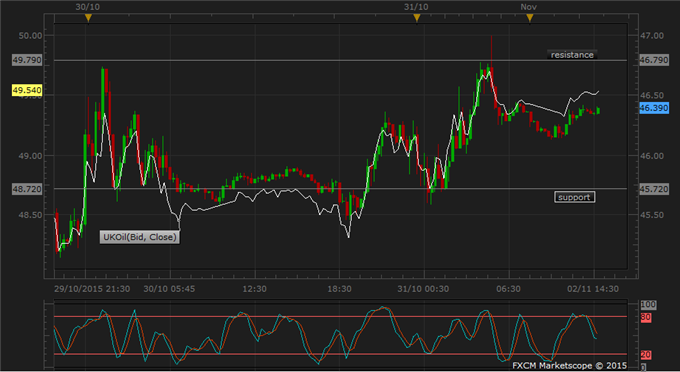