A modest retreat of the US dollar after mixed data eased pressure on commodity complex, even as gold and copper lay low after big slides yesterday. Commodities also benefited from a slight risk-on sentiment early in the morning and after the Bank of Japan’s unanimous decision to retain asset purchases at 80 trillion yen a year.

News that China abandoned its one-child policy followed the conclusion of a 13th5-year Plan, a macro eco-political guide that may shape many policies going forward. Implemented in 1980, the law aimed to restrict population growth, as such a lift of that already sent the NZ dollar up 0.5 percent on potential baby-milk demand.

Gold shed nearly $15 to hit a three-week low at 1144.8 and is poised to slide further as market digests the Fed’s hawkish statement yesterday. A no-change decision by the Bank of Japan today and mixed US data overnight provide some relief to gold prices until the end of this week.

Third-quarter Growth and Core personal consumption price index in the US missed forecast, while Initial jobless claims improved only marginally.

Oil rallied to a new weekly high at 46.80, again in the absence of market driving news. It has since fallen below Wednesday’s high at 46.22, which may act as a resistance level throughout today. The surge in oil prices was rather unfounded hence a correction is possible coming into next week. Shares of oil companies have headed south in this earning season.

Copper picked up during the Asian morning together with commodity currencies like Australian dollar, NZ dollar, and most of regional stock indices. Copper will continue to swing to the Fed’s decision and Chinese growth outlook – where more insights from China’s 13th Plenum may provide much-needed support to base metals and energy complex.

GOLD TECHNICAL ANALYSIS – Gold is vulnerable to lower moves after a break below 50% Fibo at 1152.7 with the help from downward momentum. As the decline stalls today, the gold bulls could follow momentum signals for early signs of a rebound. Moves in either direction are possible at the moment. 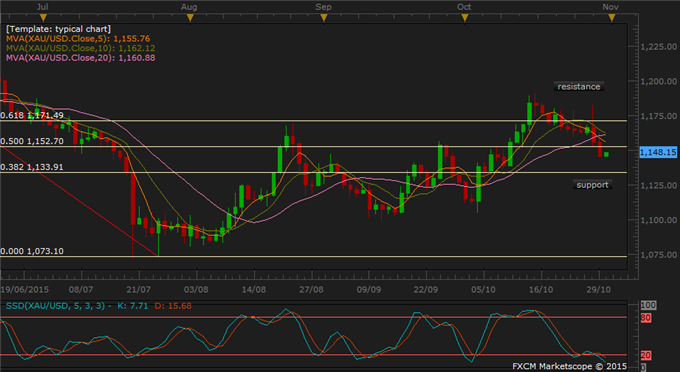 COPPER TECHNICAL ANALYSIS – Copper halted the fall ahead of 61.8% Fibo of the August-September upward correction, at 2.3135. Flat momentum signals offer little hint for next week’s development, although an absence of downward pressure indicates copper might retain above this support level. Copper remains volatile with a possible price range forming at 2.3135-2.3820. 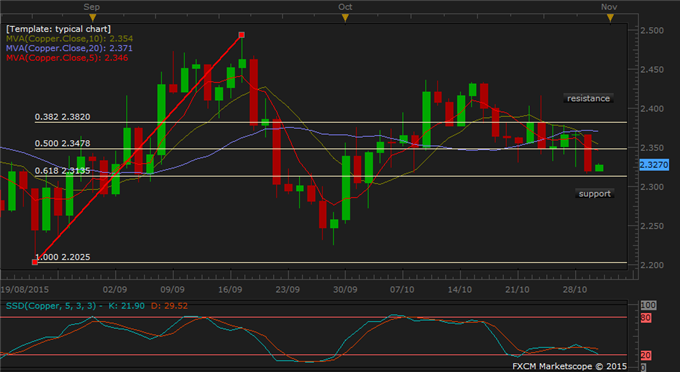 CRUDE OIL TECHNICAL ANALYSIS – Oil traded an inside day on a third day of recovery from its recent low at 43.20. The oil rally of last two days still fell short of a multi-week high at 47.97 or October’s peak at 51.42, leaving plenty of room for higher moves given a strong upward momentum. Nevertheless, the bulls should be cautious of a possible pull-back next week should oil fail to sustain the rally. 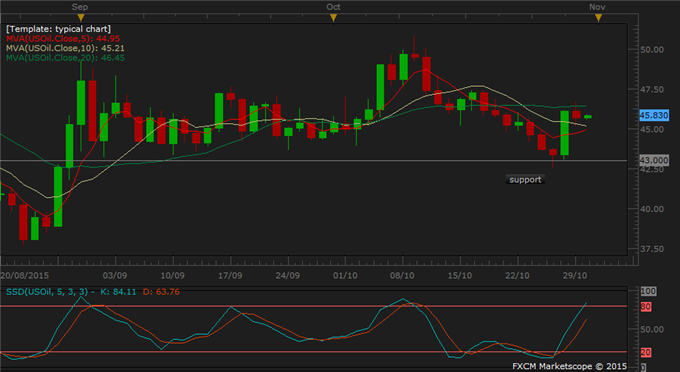