The Federal Reserve refrained from raising interest rate in its October meeting, although a rather hawkish statement lifted the US dollar in the present. Commodities experienced sharp swings although most have recovered somewhat in the Asian morning.

Coincidentally, an eight-week-high oil rally during the European/US sessions gave a boost to commodity currencies and commodity complex.

WTI oil jumped 7.3 percent or $3 a barrel during yesterday’s trade, from a low of 43.06 to a peak at 46.22. The move was triggered by a spike of buying interests before official data showing less-than-expected stock build and a pick-up in refinery operating rate.

On the other hand, possibly negative news to supply emerged in a two-year budget plan until March 2017 by U.S. House of Representatives, which relies on revenues from selling 58m barrels from the Strategic Petroleum Reserve.

Gold was the biggest loser from FOMC’s meeting, tumbling 2 percent from a peak at 1183 down to 1152.44. The precious metal is bouncing back up toward its recent range of 1160-1170, leveraging on expectation of a delay in US rate hike.

Fed funds futures today priced in higher probability for a December hike at 46.2% from yesterday’s 38%. Gold may face buying interests coming up to Bank of Japan’s meeting tomorrow on the odd chance that the bank may expand its stimulus program. In the long run, gold prices stay inversely dependent on market’s perception of how soon the Fed would raise rate.

Copper seemed unfazed by the wild volatility in FX and oil. Except for a dip to 2.3255 well before Fed meeting, it has traded within the recent 2.3425 – 2.3800 range. Temporary support from an oil rally and a few positive earnings reports from mining firms e.g. Newmont, Barrick, BHP gave copper a breather. Price action is slightly biased to downside given US dollar strength, although it is likely contained above the lower bound and then support at 2.3305.

GOLD TECHNICAL ANALYSIS – Like copper, gold halted its crash around a support level at 1151.41, and have since climbed back toward 1163.4 resistance level. Weak intraday momentum casts doubt on higher moves and failure to break through this may lead to a subsequent retreat toward 1153.05 support level. 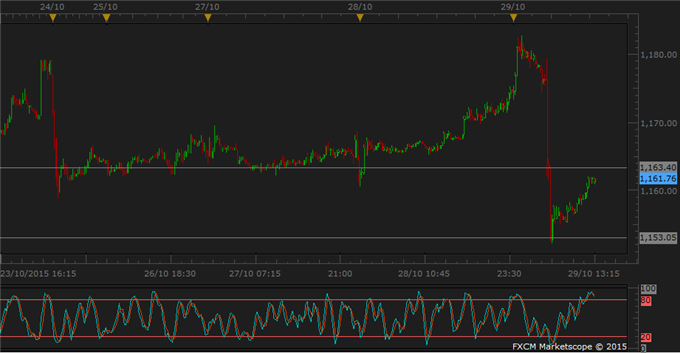 COPPER TECHNICAL ANALYSIS – Copper stayed in its recent range except for a dip before event risk’s occurrence. This range of 2.3305-2.3800 will likely contain price action for the rest of this week. A resistance and 23.6% Fibo at 2.3775 remains the focus on the daily chart, which has been tested a few times since this consolidation began on October 20. Range trades prevail. 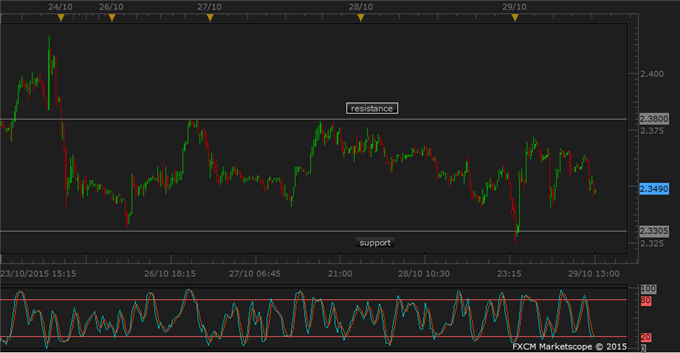 CRUDE OIL TECHNICAL ANALYSIS – After a surprise jump near 20-day moving average at 46.44, WTI oil is retreating marginally today. It initially bounced off 43.00 support and endorsed it as a lower bound of range in the short term. Going forward, profit-taking and waning buying interests will likely send oil lower toward a weak support level at 45.37. 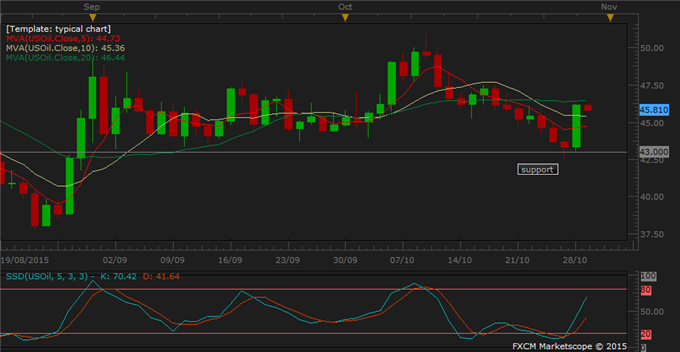