Oil dipped to the lowest since August after eight sessions of decline since October 16. Weekly data will be released today and tomorrow (US time) first by the American Petroleum Institute then the EIA. If past data is an indication, continuous swelling of crude stocks could send WTI below $43 and wipe out all gains acquired during this upward correction, since a multi-year low in August.

In North America, the December opening of a new crude pipeline from Cushing to Montreal promises a relief for the US’s oil glut. Eastern Canada refineries previously shifted from US crude shipped by rail at higher costs to Brent-priced oil shipped cheaper by sea during this year’s price slump.

Gold traded flat in the Asian morning however volatility could spike up any day coming up to Federal Reserve’s meeting on Thursday, followed by Bank of Japan’s meeting. Market’s expectation for a US rate hike this time is near the lowest this year, at 6 % chance, while probability for a December hike is 34.2% (calculated by Bloomberg). Therefore downside risk to gold price (corresponding to a rate hike) is diminished, although any hawkish message by the Fed could still send gold lower.

Copper bounced back today as China’s Industrial profits improved, after it slipped near three-week low due to a slump in US home sales. China’s IP came out at -0.1% compare with the same time last year, much better than -8.8% in September. US home sales on the other hand shrank 11.5% from the previous month, larger than the 0.6% drop forecasted by economists.

Copper is the only major commodity showing gains amid risk-selling in Asia. Volatile price action may continue above a three-week low at 2.3305.

GOLD TECHNICAL ANALYSIS – Gold finally stopped its two-week decline to record a gain today, with support level at 1156.8. Momentum signals are poised to turn up from lower bound of range, thus prices may set for higher extensions. However price action remains sensitive to market sentiment in the absence of a clear directional signal. The gold bulls may keep tight stops near support level.

COPPER TECHNICAL ANALYSIS – Copper did slip further as we suspected yesterday, although the decline halted before it would touch a support level at 2.3305 - now a double bottom. This remains an immediate support as intraday momentum reversed from yesterday’s low. Copper bounced back in Asia although it is unlikely to rise up to resistance level at 2.3800 and range-bound actions prevail. 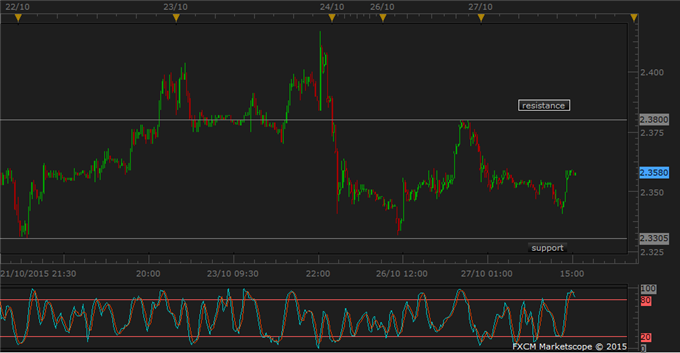 CRUDE OIL TECHNICAL ANALYSIS – WTI oil today slid to the lowest since August 27, after almost 8 straight sessions of decline. An immediate support comes at 43, whose break will open up the area below that, all the way to a multi-year low at 39.22. The bears should be prepared for volatility around weekly US data and major central bank meetings this week, to adjust their stops accordingly. 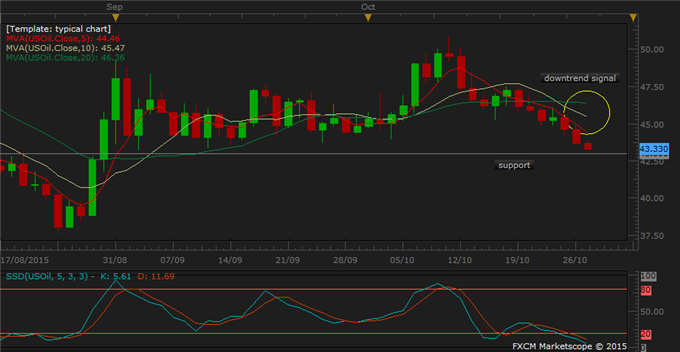