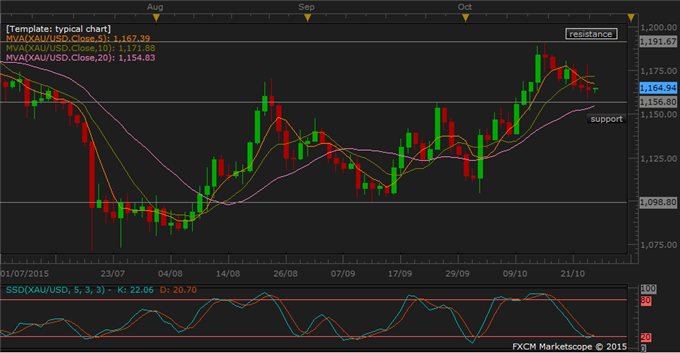 US dollar jumped after the event, inadvertently crashed commodities prices. Perception of China stimulus as a sign of slower manufacturing growth also hurt demand prospects. Although market sentiment reversed to risk-on in Asia trade, commodities have not recovered.

Gold lowered modestlyafterthe news of China’s easing. Continual easing actions by the world’s central banks should provide reasonable support to gold as a store of value and as competition loosens from interest-yielding assets.

Copper continued to weaken even as Asia market loaded on risk assets. While copper on Shanghai Future Exchange roughly stabilized above a two-day low, copper on NYMEX plunged close to the lowest since October 8 at 2.3305. Copper will likely stay weak due to mixed interpretations whether China’s easing is good for growth or it is an outward sign of slowdown.

Oil tumbled below 45 to a new 4-week low on Friday and stabilized in the proximity amid risk of a supply glut. US drillers only dropped 1 active rigs last week, according to Baker Hughes. This added to oversupply threat after EIA’s data showed US stockpiles have consistently increased since September 18.

The Singapore International Energy Week starts today which may offer helpful insights from oil market participants. An Executive Director at the Paris-based International Energy Agency commented that oil investment is likely to decline for a second year in 2016, a reflection of tougher market environment for producers.

GOLD TECHNICAL ANALYSIS – Gold held up to its October high and the highest levels since June, although recent declines have wiped out about $30 with an outside day on Friday. Prices and volatility have been muted today with little hint for future direction. Sharp moves could result from central bank events this week with higher risk (and reward) on downside moves.

COPPER TECHNICAL ANALYSIS – Copper is biased to downside with a re-test of the support level at 2.3305 earlier today, a three-week low since October 8. On daily chart, copper prices already sank below major Fibo levels. A break of this support may lead to downward reversal from October 9-16 peak, similar to what happened in the latter half of September. The bears may take advantage should this occurs. 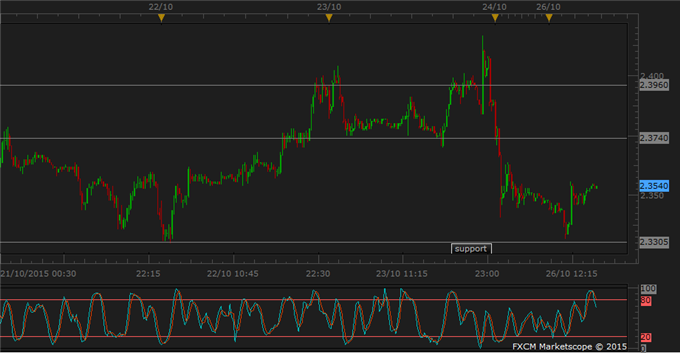 CRUDE OIL TECHNICAL ANALYSIS – On Friday, WTI oil briefly slid past a three-month support level at 44.31 that has held since the beginning of September. Oil is vulnerable to further fall given downward momentum signals, although prices have held up today. The bulls and bears alike may keep a close watch of this level for hints of a rebound or alternatively stronger downturn. 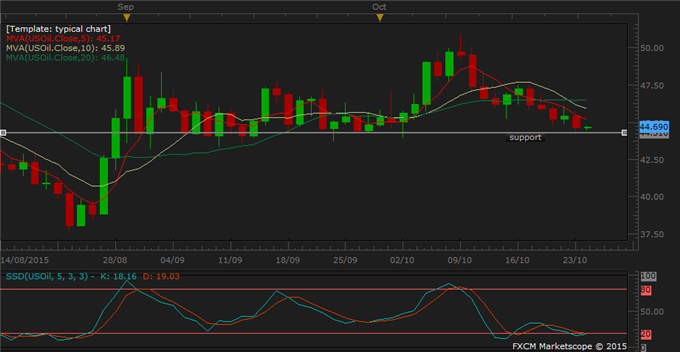