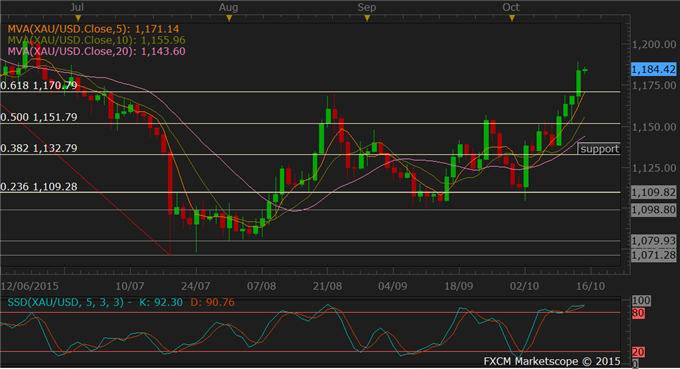 US dollar languished at four-week low after soft Retail sales and PPI data triggered speculations for a delay of interest rate tightening. DXY dollar index dipped to levels last seen in August, which boosted other G10 currencies and commodity prices except oil.

Gold climbedto 1189.91 early in the Asian morning then stabilized near this level. Buying interests returned amid increasing uncertainty on the timing of a US rate hike given soft US data. While usually not market drivers, these numbers fuelled speculations for a delay in tightening. A flurry of contradicting comments by Fed members also added to the mix.

Oil joined equities on a fourth day of declines, the longest run since July, as inventories expanded another 9.3 million barrels last week according to industry group API. The rise was somewhat expected and official data from the US Energy Information Administration later today will likely confirm this trend.

Oil remained below 47 with the downside touching 45.94, effectively confounded prices in a range. The lower bound and support will likely hold out after it endured various intraday attempts to break lower.

Copper continued a rebound in Asia, almost pared the losses from two-day prior with a 2.1 percent gain. US dollar’s weakness overnight and equities rally in Asia propped up the metal despite lingering economic worries after China data yesterday. Chinese inflation eased in September and producer prices fell for the 43rd straight month.

In the short term, import arbitrage in China and global production cutbacks will provide further support to prices. Zambia’s output is projected to fall 15 percent this year, on top of mine shutdowns by Glencore and Codelco.

GOLD TECHNICAL ANALYSIS – There is no stopping to the gold rally after prices broke through a previous resistance at 1170.7 to reach a high of 1189.91. Uptrend signal in moving averages continued to gather strength, while momentum shows no sign of exhaustion. 1170.7 level now coincides with 5-day moving average to provide a support where the bulls can trail their stops.

COPPER TECHNICAL ANALYSIS – Copper is firmly supported around 23.6% Fibo at 2.3775 while it is making further climb toward September top and 38.2% Fibo at 2.4858. Sufficient upward momentum promises higher moves in the near term and offer opportunities for range trade. 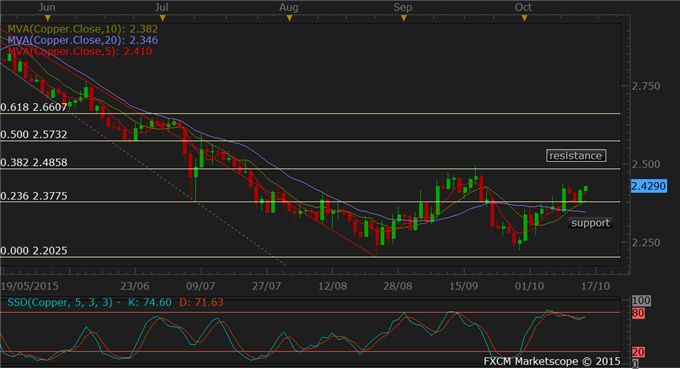 CRUDE OIL TECHNICAL ANALYSIS – WTI oil was range-bound between a support-turn-resistance at 47 and yesterday’s low at 45.94. It will likely trade within this range until more supply information comes from official US inventory data. Any upside surprise in this weekly report may push it up above 38.2% Fibo at 46.82 again. Daily momentum remained on a downside bias as oil continues to retreat within the wide Sept-Oct range. 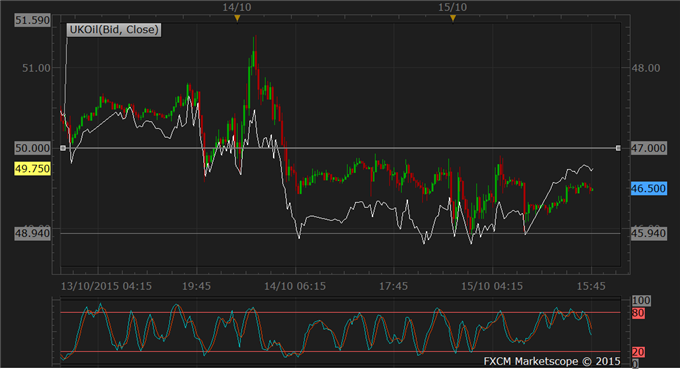