Asia followed the oil flip and equities sell-off in Europe and US to open on a risk-off tone for the first day in a while. Commodities have since bounced back modestly in line with a regional stock pick-up, particularly Shanghai stocks, though they largely remained under pressure except for gold.

Gold jumped above 1170, a resistance that had held throughout its ascent this week, to reach the highest since July 6 at 1174.81. Gold has progressively climbed during October as Fed comments and lukewarm economic data diminished expectations for a Fed rate hike. If global growth risk was cited as one of the reasons to hold off interest rate, that has not changed as China imports data shrank to the lowest since June.

Looking forward, gold has formed a bullish triangle since October 2 which may predict rising prices. Higher gold demand corresponds to lower chances of a lift-off in 2015, currently at 35.2%.

Oil reversed earlier strength to touch a weekly low and remained vulnerable to lower prices after a monthly report by the Paris-based International Energy Agency projected the oversupply to last through next year given demand slowdown. U.S. stockpiles are also expected to rise in this week’s EIA report, setting up more sell-off.

Oil returned to the technical range within August – October correction, bordered by 23.6% and 38.2% Fibonacci. The 50-day moving average could provide a temporary support at 45.34.

Due to Columbus holiday in the US, weekly reports by American Petroleum Institute and Energy Information Administration will be delayed by one day. News of a meeting of OPEC and 8 non-OPEC crude producers on October 21 to discuss production has failed to revive prices.

This morning in Asia, copper pared some of yesterday’s losses following a recovery in regional equities, led by the Shanghai Composite index. Headwinds to global growth has outweighed a 20-month high China’s copper purchases. Economic pressure remained strong on copper and the metal complex.

GOLD TECHNICAL ANALYSIS – Gold rose to a past resistance in July around 1174.6-1175.1, though it remained between the resistance and support trend lines. These trend lines have formed a bullish triangle since gold rally started on October 2, giving opportunities to the bulls on the way up. Prices broke above 61.8% Fibo at 1170.8 today and opened the upside all the way toward 1200 big figure in the absence of strong resistance level. 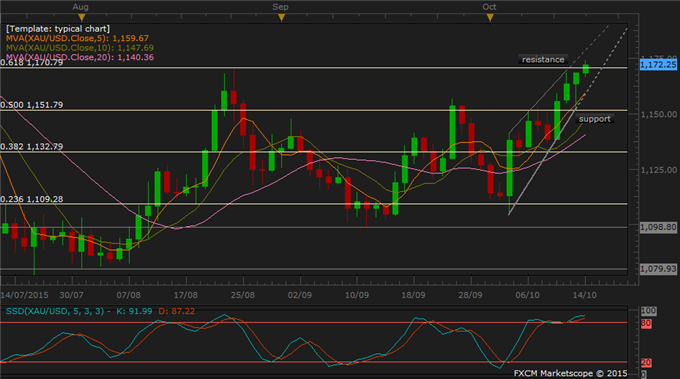 COPPER TECHNICAL ANALYSIS – Copper currently parks on the 23.6% Fibo - also a support level - at 2.3775, with momentum signals poised for a downturn. Lower extensions seem possible, in which case support could be found at a 50-day moving average at 2.3491. The bears should wait for a breach of support before entering positions. 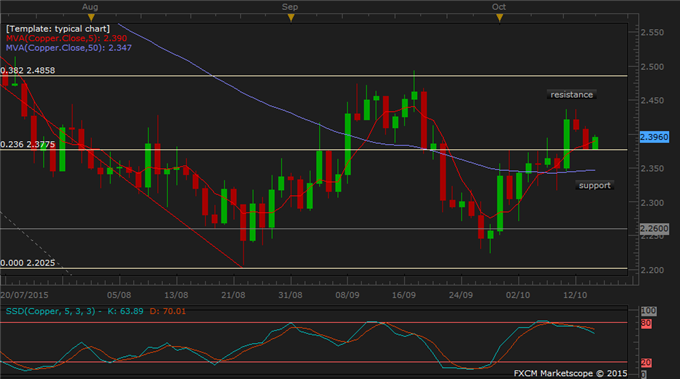 CRUDE OIL TECHNICAL ANALYSIS – WTI oil traded a tight range in the Asian morning after it retreated below $47 and returned to a range between 23.6% and 38.2% Fibonacci, at 43.59-47.21. Yesterday’s low at 46.44 provides a temporary support level during this thin market. Oil is going through a consolidation after its rapid rise in early October, showing choppy price action rather than directional move. 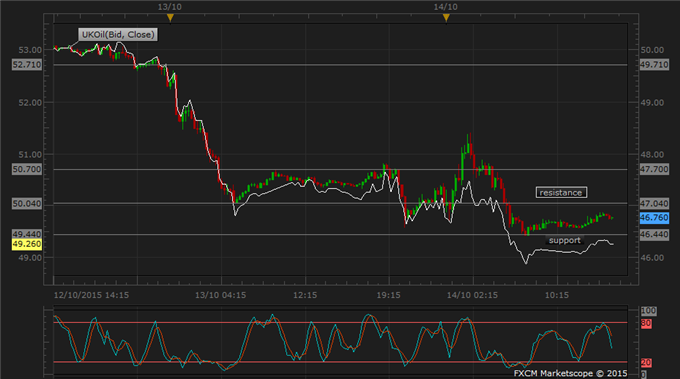