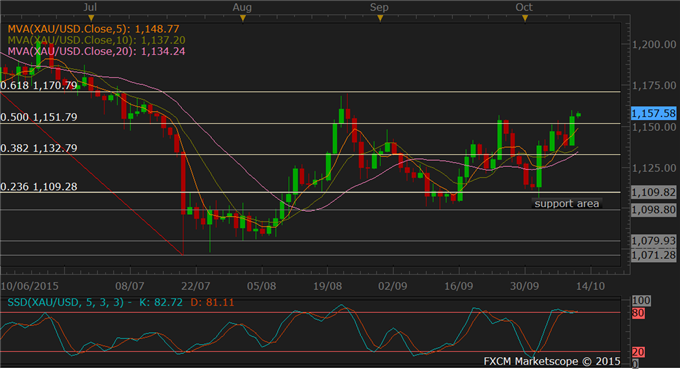 A round of risk buying pushed up commodities prices last Friday while prompted USD selling across the board. Asian equities have kept risk-on alive so far. This week the market awaits Chinese trade data for a gauge of the country’s economic health that may prompt risk buying/selling.

Speeches from various Federal Reserve members indicated that a U.S. rate hike in 2015 remained uncertain, therefore gave gold a boost. Lockhart and Dudley emphasised on satisfactory economic and employment recovery, while Evans advocated delaying until 2016 and Fischer raised concern of hiking too early.

Gold took cue to mount to 1159.78, just short of 1960 level last seen in August. Technical analysis shows that uptrend signal is forming and a support level at 1154.92 may help to limit further downside.

WTI oil consolidated higher in Asia after it traded a wide band of 49.17–50.92 on Friday reached the highest since July. Oil prices likely stay supported around $50 mark during the Asian session, after US drillers cut active oil rigs for the sixth straight week and as market awaits Chinese trade data.

OPEC’s monthly oil market report published today may offer an insight into recent demand optimism for this year and 2016. In the U.S., House of Representatives passed a bill to repeal the oil export ban, which would support prices, although it may be stopped by a presidential veto.

Copper traded within a band of 2.3960 – 2.4375, the earlier is a resistance-turn-support. A 3 percent jump in Chinese equities at late morning Asia led to some topside volatility although Friday’s three-week high is unlikely to give way. A firm support at 2.3775 holds up the downside.

After forming a bottom near end of September, copper has rebounded sharply and could head to 2.4930 September high if Chinese trade balance and import data surprise on the upside.

Industrial metals have grown sensitive to global economic health after a couple of equities rout since June, effectively deviating from fundamental supply-demand factors. This is unlikely to change for the rest of this year with event risk from central banks and uncertainty in Chinese asset market. Rio Tinto joined other miners to warn investors of short bets - largely as a proxy of China.

GOLD TECHNICAL ANALYSIS – Gold climbed above the 50% Fibo at 1151.8 and there is no stopping on the upside with moving averages indicating an uptrend signal. The climb may slow down from here as momentum seems to have peaked. Next resistance level to watch out for is the 61.8% Fibo at 1170.8. Downside risk is limited with the 50% Fibo as immediate support.

COPPER TECHNICAL ANALYSIS – Copper traded between 2.3960 - 2.4375 in Asia and could re-test the 3-week high level if equities continue to rise. A new week with major data sees intraday momentum waning and prices in a range. Copper is the only one among major commodities that has not shown signs of technical uptrend, therefore large swings due to market sentiment may risk the downside. Range trading is prevalent in short-term. 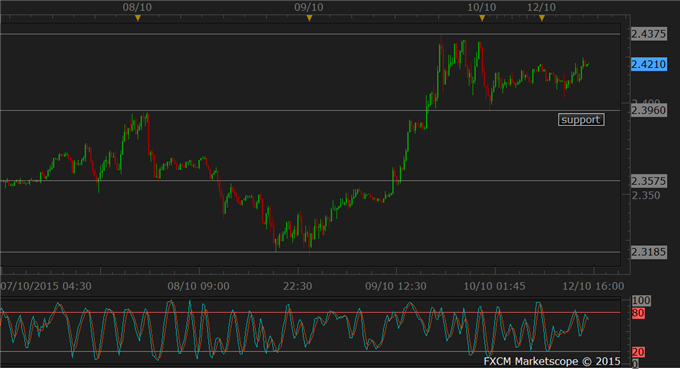 CRUDE OIL TECHNICAL ANALYSIS – WTI oil gradually climbed back up in Asia after Friday session ended with a dip to 49.17, despite reaching a 3-month high at 50.92. This bottom coincides with 5-day moving average to form a support at 49.17- 49.27. Moving averages have aligned to an uptrend signal and higher moves could be achieved if oil can hold on to the $50 region. Bull traders may keep their stops trailing the MA for caution. 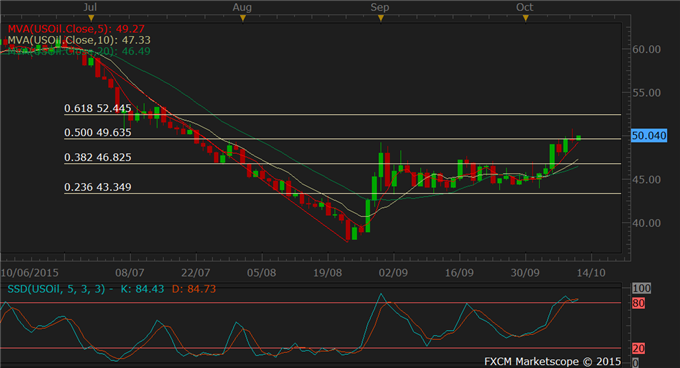