The oil rally in Asia and Europe was just shy of $50 mark before it reversed half way through the US session and dragged equities down. Oil shrank nearly $2 after the much anticipated weekly report by U.S. Energy Information Administration showed a rise in both inventories and production, contrasting to the API’s report a day before.

US inventories rose by 3.07 million barrels in the week ended Wednesday, while output expanded for the second time in 3 weeks and refinery utilization dropped 2.3 percent. The recent supply-driven rally may not be sustainable until positive changes on demand contribute to the equation.

The US Congress will consider a bill to end the 40-year oil export ban this week. A lift would support international oil prices and offer a way out for US energy producers amid falling demand and increasing production. The ban was put in place after the 1973 Arab oil embargo and has become outdated as hydraulic fracturing or “fracking” enabled wider and cheaper extraction of oil and natural gas.

Copper witnessed sharp swings on both the LME and SHFE exchanges as China market started its first day back at work. Both volatility and liquidity in Asia are set to rise as market sentiment alternates between selling for profit at high levels and buying the risk rally.

Copper has retreated below the 23.6% Fibo at 2.3775 and unlikely to climb back up today. This resistance capped the topside during September 23 – October 6 despite various attempts to test. On the downside, copper garnered support from tightening supplies as inventories tracked by the London Metal Exchange fell for an eighth day to the lowest since June, and stockpiles in China bonded-warehouses are said to shrink 22 percent last month.

Goldpared two-day gains and retreated from a weekly high in the US session as market positioned prior to China re-open and a release of the last Fed’s meeting minutes. It was also dragged down by the sharpest drop in silver since September 28.

Gold has stabilized above a support at 1142.07 with seemingly muted action during Asia trade, before volatility picks up with Fed’s minutes release. Gold prices will be more vulnerable to downward moves if a rate hike in 2015 is deemed alive from the statement.

GOLD TECHNICAL ANALYSIS – Gold lowered in line with other commodities to touch down on a former resistance level – now turn into support – at 1142.07. Its reach up into the resistance area comprising of Fibo and past daily high at 1151.7-1156.8 during the overnight rally, though failed to break through. Overall, gold remains range-bound with focus on downside extensions. 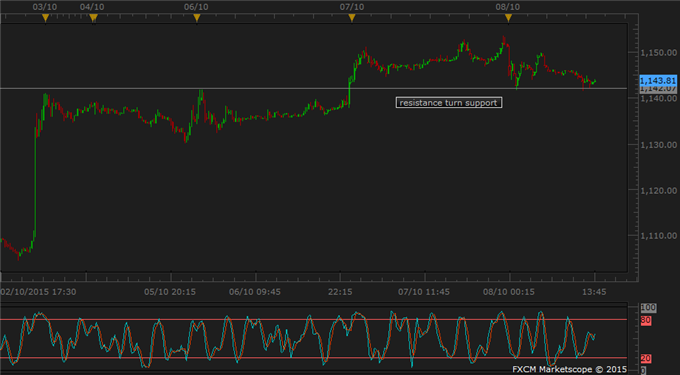 COPPER TECHNICAL ANALYSIS – Copper retreated below the September – October resistance and 23.6% Fibo at 2.3775 after a brief break yesterday. As we observed in the last few reports, momentum is now poised to turn down after reaching the upper bound of range. Until a downturn is confirmed, copper will likely linger close to the resistance level which may offer opportunities for the bears to consider short positions. 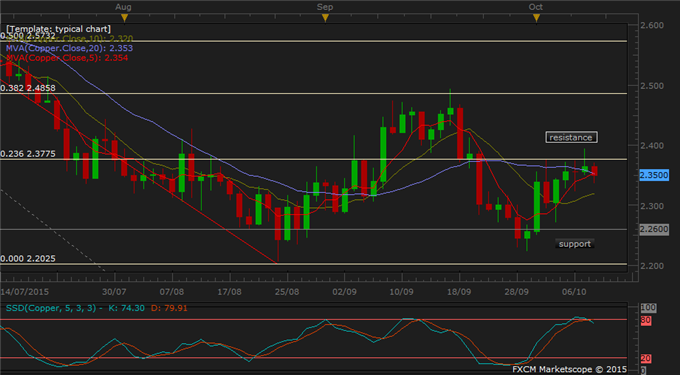 CRUDE OIL TECHNICAL ANALYSIS – WTI oil retreated near an intraday support level at 47.70 for the third time since it reversed the rally in US. This support is but a short distance from the 38.2% Fibo at 47.21 and 5-day moving average at 47.39 on the daily chart, therefore may hold out today. Brent oil follows WTI to stabilize lower. However higher extensions are not yet ruled out at this stage, given sufficient upward momentum. 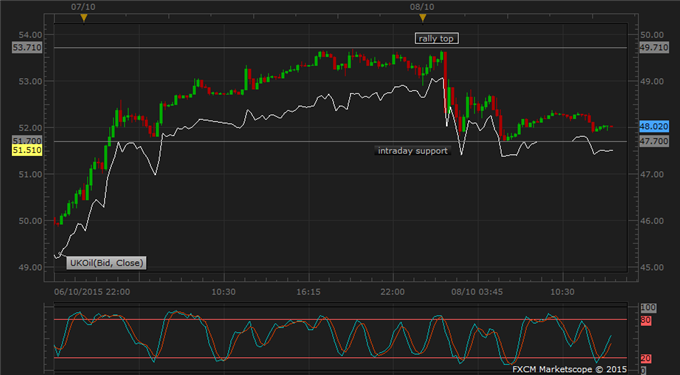