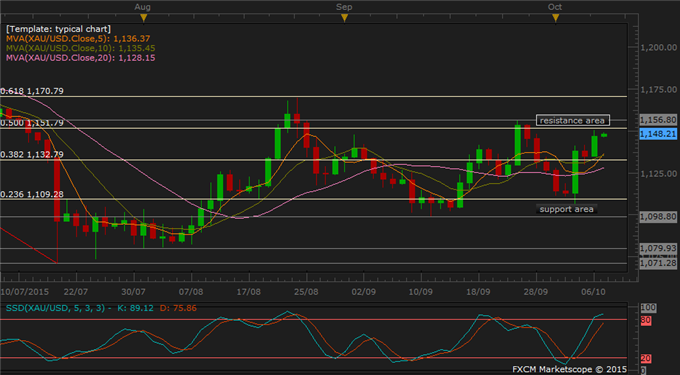 Commodities benefited from US dollar weakness and a risk rally throughout the European and US sessions, although that has faded somewhat into Asia trade. Nevertheless, selling of fixed-return assets continued and commodities, equities remained supported.

In the US, August trade deficit widened by 15.6 percent and slightly missed forecast, which also casted doubt on the prospects of a rate hike this year.

Oil has jumped 7.6 percent from 45.88 at the New York open to 49.38 early in the Asian morning, with further upside possible. It closed last session at nearly two-month high after the American Petroleum Institute enhanced the rally with report that crude stocks fell by 1.23 million barrels last week.

Other contributing factor to this frenzied buying were the shock of a sharp cut in active drilling rigs as we reported and potential talks between Russia and OPEC by the end of October. A pattern clearly emerged that producers on both sides of the Atlantic are looking to moderate production to cope with falling profits.

Main data for WTI oil today is a weekly stockpile report by the U.S. Energy Information Administration, which may not necessarily agree with the API’s reduction, as seen in various occasions. Until then, oil may relish further gains while risk assets remain moderately supported during Asia trade.

Gold recorded the second biggest gains among major commodities today as investors flocked into this safe haven after the IMF lowered global growth forecast for this year from 3.3 percent (in July) to 3.1 percent, in its World Economic Outlookon Tuesday. Next year growth was also scaled down to 3.6 percent.

Gold also benefited from the report’s seemingly call for delay of a US interest rate rise, “until there are firmer signs of inflation rising steadily toward the Federal Reserve's 2% medium-term inflation objective, with continued strength in the labor market”.

In Asia, China’s September foreign exchange reserve data released today outlined that it may have increased gold holding by around 15 metric tons. This further confirmed the country’s demand for reserve purpose after a 1 percent increase in August.

Copper rose a fourth day with risk-on sentiment amid on-going production cutbacks, though subject to swings from growth concerns. It paused ahead of 2.3775 resistance level and it is uncertain whether today’s waning risk rally could prompt prices to break above this.

On the downside, industrial metals garnered unexpected support from IMF Chief Economist’s confidence in China. Maurice Obstfeld answered reporters after the report that “China rebalancing is both healthy and necessary” and “Chinese fiscal measures are supporting growth” whereas “[global] Recession is not IMF’s baseline scenario”.

GOLD TECHNICAL ANALYSIS – Gold leaped to reach up to 50% Fibo at 1151.79 yesterday and may re-test the resistance area - comprising of this Fibo and past daily high in 1151.7-1156.8. Among the major commodities, gold displays the weakest momentum at topside, therefore least likely to break out of range in the near term. The gold bulls should take caution at repeated failures of gold to break through this level. The downside is firmly supported at 1132.79 (38.2% Fibo).

COPPER TECHNICAL ANALYSIS – Copper approached the 2.3775 resistance or 23.6% Fibo for the fourth time this month, therefore confirmed the stickiness of this level. Upward momentum will likely retain prices in the proximity of resistance and limit downside extensions even at no break. Above that, a medium term resistance is found at 38.2% Fibo at 2.4858. China market re-open on Friday will offer more hints on future direction of copper. 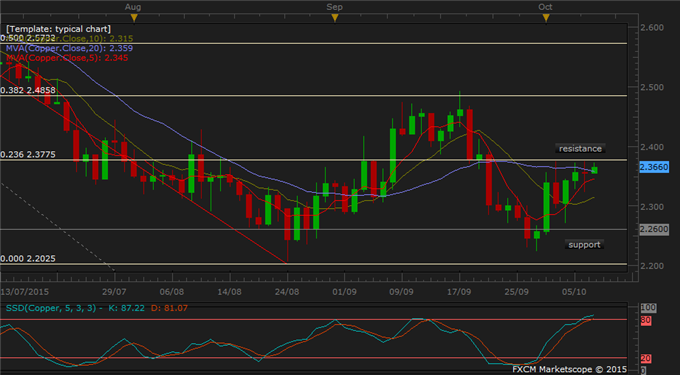 CRUDE OIL TECHNICAL ANALYSIS – WTI oil jumped from 45.88 in NY to 49.38 in Asia so far. This is now very close to an outer bound of its September-October range, the 50% Fibo, at 50.14. A break above the $50 handle would effectively annul the range and make up a bullish signal, although the chance is slim. The bulls and bears alike may position around this level. At downside, immediate support is found at 38.2% Fibo at 47.21. 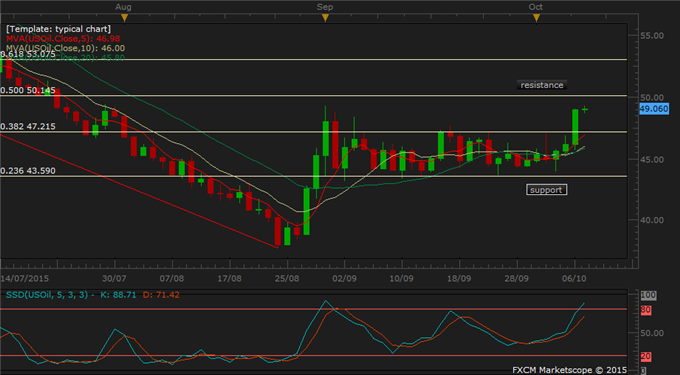