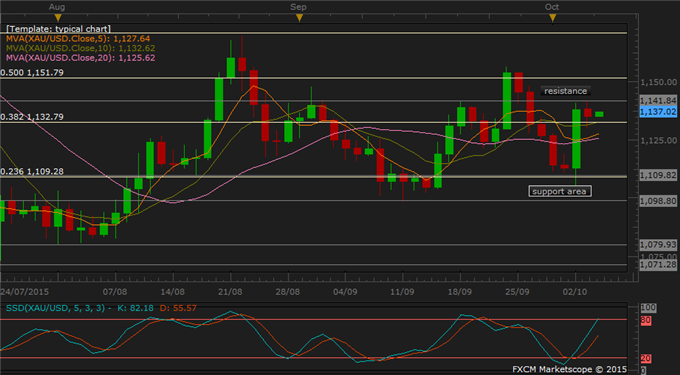 The risk rally continued in Asia following S&P’s longest rally of the year, as a disappointingly low U.S. Non-farm payrolls data on Friday spurred speculations the Federal Reserve may hold off an interest rate rise at its October meeting and during this year.

Commodities calmed down from New York session’s peaks as weakness in the US dollar dissipated, except for gold which held on to the top. Upward swings remain possible although unlikely to surpass yesterday’s highs.

Gold held on to its topside in 1132.4-1142 area, despite some selling late in the European sessions (likely from profit taking). The precious metal benefited greatly from expectations that the Fed may push out interest rate hike into next year, thus reducing downside risk to gold investors in the short term. Bloomberg calculated a mere 10% probability of a 25 basis point rise in October using Fed fund futures, with March 2016 the first period with chances higher than 50%.

Gold will remain range-bound except for surprises from central bank events while China market is closed: Bank of Japan and ECB’s Draghi speech on Wednesday (Asia), Bank of England on Thursday, and various Fed speakers this week.

WTI oil stabilised lower as US dollar rebounded from two days of weakness, although it remained above $46 with downside support from output cuts in the US. Number of active rigs drilling for crude in the US fell by 26 on the sixth straight week of decline.

News that Russia is prepared to discuss with OPEC and non-OPEC oil producers at the end of this month failed to excite the market. However upcoming U.S. inventories data may do a better job, with API’s report today and EIA’s report tomorrow.

Copper held gains near a two-week high of 2.3765, coinciding with 23.6% Fibonacci of the May-August decline. While China market remains shut until Thursday for Golden Week, copper took cue from regional equities market and has weakened somewhat during the Asian morning. If 2.3425 temporary support is broken, prices will test firm support in the area of 2.3295-2.3340.

Similar to oil, forecasts of price recovery by Glencore and Pan Pacific Copper Co (Japan’s biggest producer) faded into the background. Instead, copper will look to economic data in Europe this week for more hints of industrial activities.

GOLD TECHNICAL ANALYSIS – Gold tested the 1141.84 resistance in the last two sessions and may repeat that today as momentum continued building up. This resistance level could prove hard to break after it held through mid-September. The gold bulls should be watching that and a temporary support level at 38.2% Fibo of 1132.8 for any outside moves.

COPPER TECHNICAL ANALYSIS – Copper lingered below 23.6% Fibo at 2.3775 although it held on to gains since Friday. This resistance will continue to guide price action as copper approaches and bounces off it, more so as momentum looks near exhaustion being close to the upper bound. The downside of copper prices remains limited. 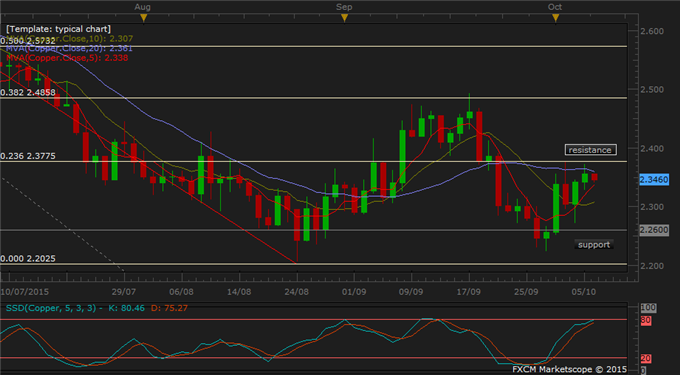 CRUDE OIL TECHNICAL ANALYSIS – WTI oil swung around within a range between 23.6% and 38.2% Fibo, at 43.59-47.21. A break through at topside is a prerequisite to more outside moves, otherwise it will remain range-bound despite an upward bias. The bulls may take caution at repeated failures to break out. 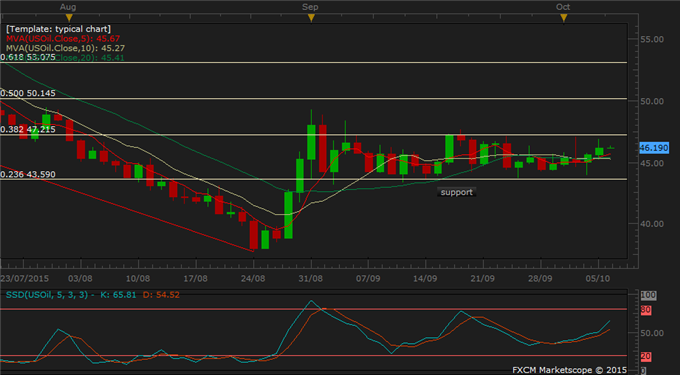