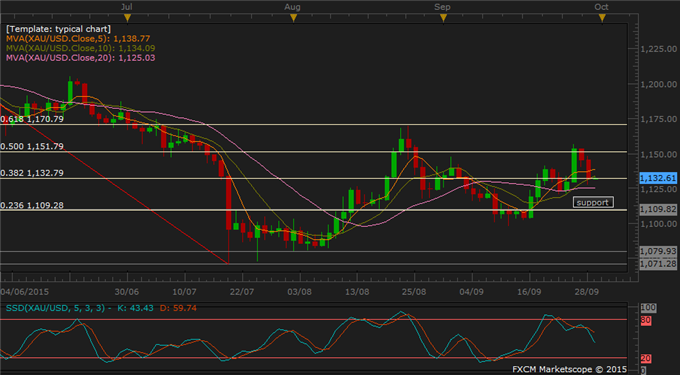 Commodities fell and metals traded near six-year low after August China’s Industrial Profits hit the lowest since October 2011 at -8.8 percent and IMF Chief Lagarde spoke about lower world GDP forecast. These implied a slowdown in demand for commodities, especially from China.

The commodity sell-off also deepened an equities rout in London and NY, which carried onto Asia with the ASX approaching a two-year low and the Nikkei index barely above YTD low in December-January.

Copper plummeted to a monthly low at 2.2320, only 300 points above a six-year low at 2.2025. It has consistently declined since September 17 and a downtrend signal is forming, subject to a break of this key support level.

Market sentiment has turned negative for copper unless US Non-farm payrolls data comes out strong and revives risk appetite. Metals spiraled downward together with shares of producers. Oil and metal producer Glencore saw the worst intraday loss since its IPO in 2011, while Alcoa (Aluminum Company of America) split its aluminum smelting operation from the healthier plane and car parts business.

WTI Oil traded flat in the Asian morning after it dropped nearly 3 percent to a 44.30 trough on China demand concerns. Demand woes have returned to stifle prices once more, after oil established an elevated range early September from reducing US stockpiles and a soft USD.

Crude oil prices are currently near the lower bound of range and a break below 43.40 may complete this upward correction. U.S. ADP and September Non-farm payrolls later this week are most anticipated to trigger volatility in the US dollar and consequently oil prices.

Gold stabilized in the 1130s region after it plunged to a two-day low of 1128.16, countering safe haven demand resulted from the commodities and equities routs. This weakness may prolong if good US data keep coming and boosting rate hike chances ahead of Non-farm Payrolls this Friday.

Gold’s reversal followed talks by Federal Reserve members Dudley and Williams to affirm livelihood of a 2015 rate hike, before good US Personal Spending and PCE core data prompted it to hit bottom. A 1.75 percent decline yesterday amounted to the biggest loss in a month as gold gave back all gains made in the past two sessions.

GOLD TECHNICAL ANALYSIS – Gold broke below the 38.2% Fibo at 1132.79 yesterday and momentum signals still indicate lower prices in store. The bulls could take the 20-day moving average (currently at 1125) for a support level, whose break would assert a downward reversal. Below that, a firm support and 23.6% Fibo at 1109.28 should contain the downside for gold until the release of a major US data later this week.

COPPER TECHNICAL ANALYSIS – Copper broke below the 2.2600 support yesterday to reach a new September low at 2.2320, on the way towards a six-year low and firm support at 2.2025. Moving averages are at the early stage of downtrend formation. A break of support would trigger massive selling as well as a strong downtrend signal, hence it is a critical level to watch for both bulls and bears. In the near-term, flat momentum indicates that the support will likely hold. 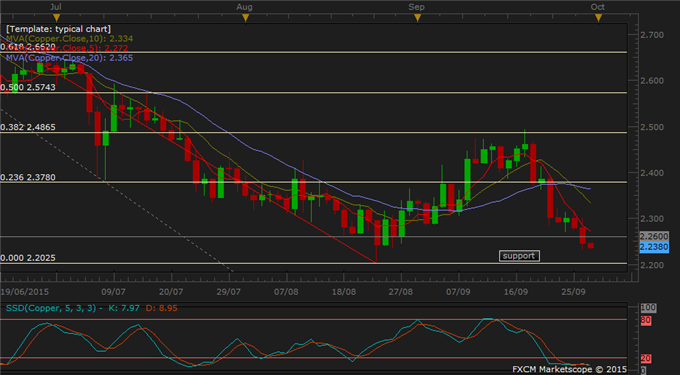 CRUDE OIL TECHNICAL ANALYSIS – WTI oil continuingly slid towards 23.6% Fibo at 43.35, the lower bound of its September correction after the June-August decline. A break of this support level would indicate that ranging movements have come to an end and open up the region below $40 mark. Momentum signals look weak despite a downward bias, hence it is unclear whether a break may occur. 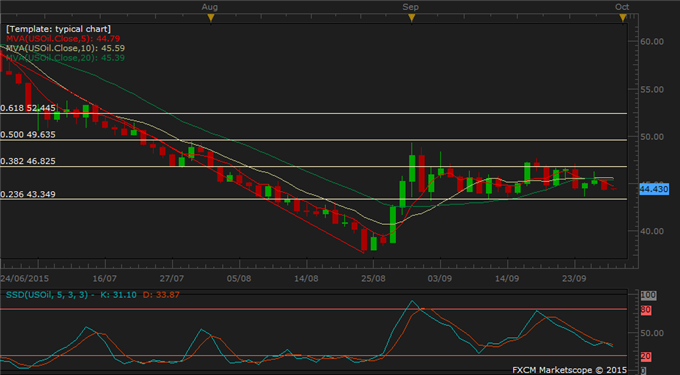