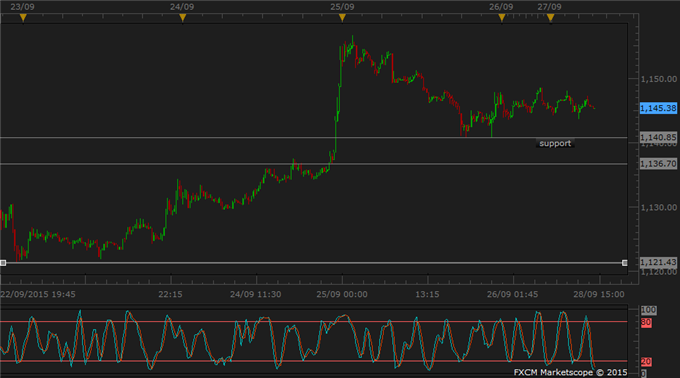 A mixed effects of weak USD and risk off-loading saw commodities leaning to the downside in the Asian morning. The US dollar weakened with US stock loss late in the New York session and as 2-year Treasury rose. Early action in Asia continued this theme, Aussie government bonds rose and Nikkei lost around 1 percent.

Important data this week is Non-farm payrolls on October 2, a pivotal indicator for US dollar’s direction via its impact to the feasibility of a Federal Reserve’s rate hike this year. Other notable data in the U.S. are ADP employment, Initial jobless claims and Unemployment rate.

Gold held loss from Friday, although a firm support has emerged at 1140.85 where it fell to break through twice in New York. The market inferred that Fed Chair Yellen’s talk at UMass confirmed the viability of a 2015 tightening. This garnered more support from a pick-up in US economic growth shown in solid second-quarter GDP and core PCE on Friday.

As a result, gold reversed down from its recent top at 1156.8 and will likely stay subdued throughout early this week until the market takes positions ahead of Non-farm payrolls. Gold is on a fifth straight quarter of losses in the face of forthcoming US interest rate rise.

Part of this optimism could have stemmed from rising demand for refined-products which may help to dent the crude oversupply. US gasoline demand rose at the fastest rate since 1985 in the first six months of the year, at 350,000 barrels a day, as prices benefited greatly from a 60 percent drop in crude oil price since June 2014. The US is the world’s largest gasoline consumer which accounts for around 10 percent of world’s crude and condensates production.

Copper picked up in the Asian morning in line with gains in Shanghai equities, after it hit a low of 2.2770 late in New York together with S&P losses. Bullish calls emerged after supply disruptions related to Glencore, Freeport, Chile earthquake and Zambia were calculated to take out from 1.2 to 1.5 million tons of supply from a 22 million ton market.

However COMEX copper recorded the biggest weekly loss since July amidst a slowdown in China. Furthermore, copper stocks in China’s bonded-warehouses were largely unknown and could offset this supply cut. Bloomberg Intelligence reported that these exceeded the quantity tracked by all warehouses linked to LME, COMEX and NYMEX.

GOLD TECHNICAL ANALYSIS – Gold failed to break below a support at 1140.85 during New York session and has traded well above it in the morning Asia. Intraday momentum revealed a relentless downward pressure hence the upside of prices could be limited in the near-term. The bears may look to any break of support levels at 1140.85 and 1136.7 to take profit, before event risk may change course of price action later this week.

COPPER TECHNICAL ANALYSIS – Copper is on a fifth day of sideways moves after a decline from the 23.6% Fibo with no sign for upcoming volatility. Momentum signals stayed flat below the lower bound of range, indicating a prolonged price trough. Immediate support level comes at 2.2600, with a multi-year low of 2.2080 right below. Hence downside is limited against a reasonable upside potential, however the bulls should keep close watch of support levels. 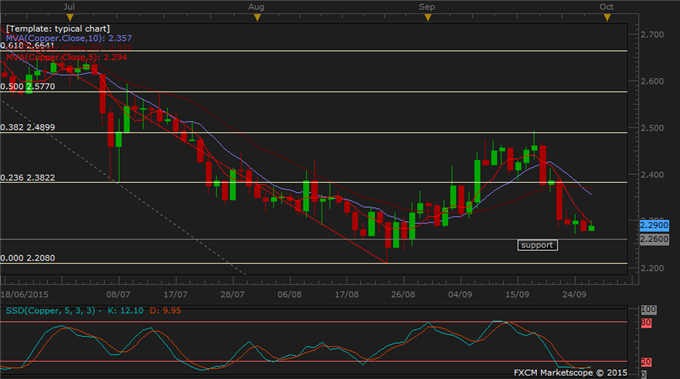 CRUDE OIL TECHNICAL ANALYSIS – WTI oil remained stuck in a range confounded between 23.6% and 38.2% (or 50%) Fibo. There is little hint for price direction other than early upward pressure seen in momentum signals. The bulls may place their stops and targets based on these Fibo levels. Downside risk remains limited. 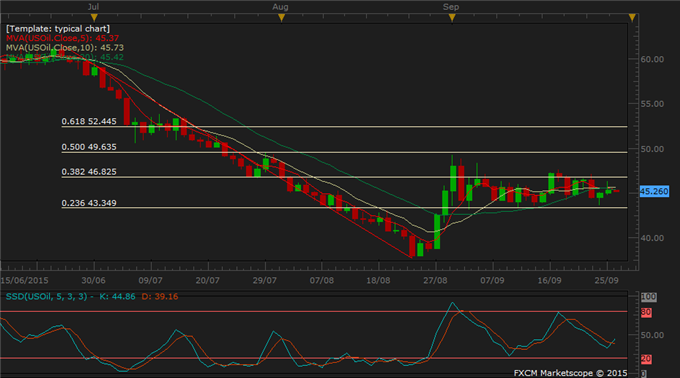