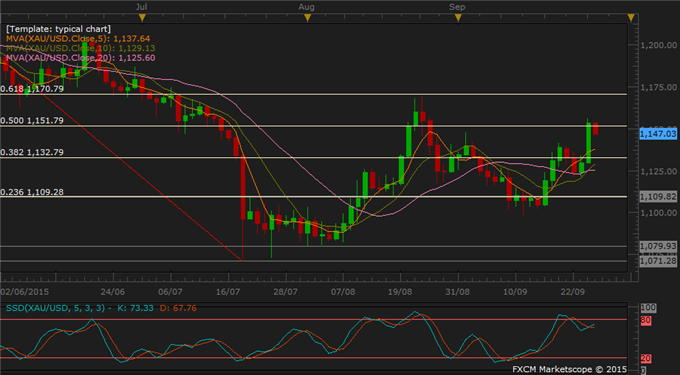 Gold opened lower as US dollar rose after Federal Reserve Chair Yellen’s speech at the University of Massachusetts seemed to affirm rate tightening in 2015 and USD were bought. The retreat finds support at 38.2% Fibonacci at 1136.6. Gold should remain elevated throughout talks and market volatility, until the Fed sends clearer signals on their timing bias.

Janet Yellen virtually skipped China and global growth to discuss US domestic economy instead: a slack in utilization, long-run level of unemployment rate, and inflation below 2 % target, all resonated assessments at the last FOMC meeting.

Gold previously surged to a top at 1156.8 on soft US data: ‘durable goods orders’ stalled after two month of gains and ‘durables ex-transportation’ missed forecast.

Oil traded subdued below 45 on a second day, after it recovered at 1 percent gain from a dip to 43.71 alongside European and US stock loss. Oil volatility has dropped in Asia trade and oil prices likely stuck in this correction range until the weekend.

Nevertheless, WTI crude oil still heads for a second week of advance as stockpile decrease offset production growth and waning summer demand. Refinery utilization also dropped the most since January as maintenance season started, which could prop up crude prices throughout.

Copper pared a weekly decline to return above 2.3000 as US new home sales data jumped to a seven-year high and boosted demand outlook. The US is the world’s second largest copper consumer after China. Like oil, fundamental factors are supporting copper in the short term hence it may hold on to the 2.30-2.31 area until the weekend.

GOLD TECHNICAL ANALYSIS – Gold retreated after yesterday’s surge above the 50% Fibo at 1151.79. Downside support is found at 38.2% Fibo and 20-day moving average at 1125.6. After gold failed to make a clean break to enter area above 1150, an ensuing correction may follow. However downside extensions are limited as momentum signals still indicate elevated interests.

COPPER TECHNICAL ANALYSIS – Copper dipped below 2.2855 intraday support overnight yet quickly climbed back up to the usual range detailed by resistance and support levels below. The metal carries on sideway moves on a third day with no sign of volatility building up. Range traders may continue to play the range with caution given to the downside. 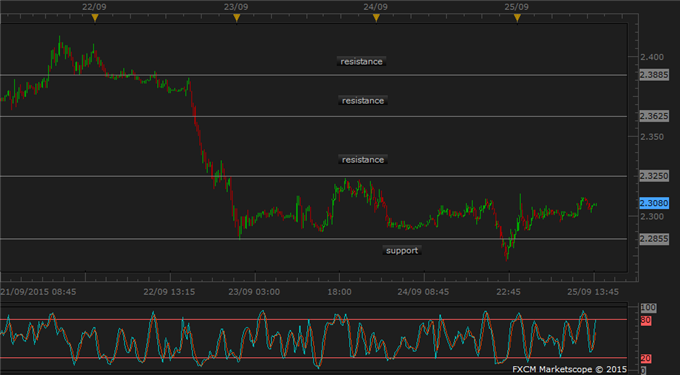 CRUDE OIL TECHNICAL ANALYSIS – Like copper, WTI oil swiftly pulled back into the 44.41-45.37 range after a dip to 43.71. Intraday momentum indicates an upside bias hence prices will likely stay supported throughout today’s session. Overall, oil prices still float well above a firm support at 23.6% Fibo at 43.40. There is little downside risk in the near term although no directional signal has emerged. 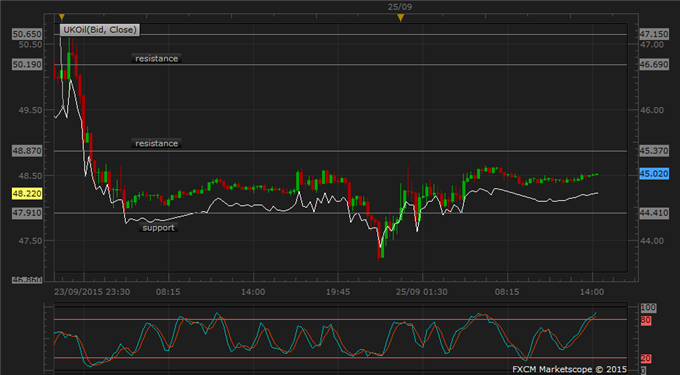