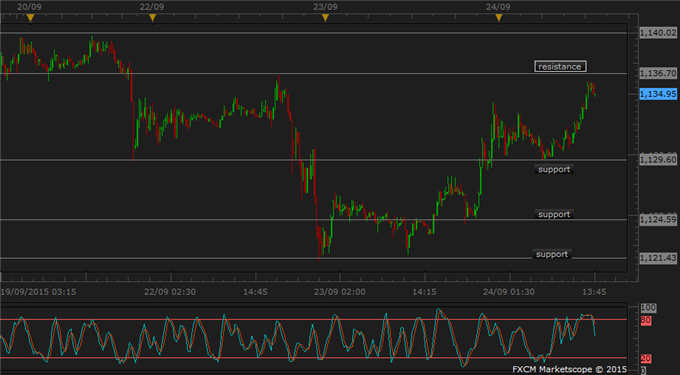 Commodities set on a recovery path in Asia after a big sell-off during European and US sessions that saw them hitting the bottoms simultaneous to equity losses. Both equities and commodities posted gains so far in Asia, although risk-off trades echoing China woes were not completely gone as evident in Nikkei’s loss and Australian bonds’ gains.

President Draghi of the European Central Bank disappointed dovish (and stimulus) expectations in his testimony to the Committee on Economic and Monetary Affairs of the European Parliament. He described the current policy as effective and that quantitative easing could be extended [only] if needed. This gave some assurance on economic conditions, so were French, German and Eurozone PMIs roughly in line with forecasts. The resilience in the European economy helped to ease demand concerns in commodities.

Oil picked up gently in the Asian morning though it was but a small rebound after last night’s crash. WTI plunged to 44.41 and Brent dipped past a previous daily low to 47.68. The market was caught by surprise and price trapped in a free fall as the Energy Information Administration reported US output rose for the first time in 7 weeks by 9.14 barrels, while utilization rate dropped the most since January at 2.2 percent. Prior to the report, oil rose on expectation of an output fall similar to API’s data.

In absence of major events and as Iran deal is in process, oil prices will likely swing between 43.89-50.04 range established early September, after a two-month slide towards the 38.51 record low.

Copper barely picked up from its three-day low at 2.2855 as China’s factory weakness reverberated through to Asia session. Selling pressure in the metal is adamant, it could not sustain a short-term top at 2.3250 together with zinc’s rally. US new home sales data today may add more pressure on demand if it comes out lower than July’s 5.4 percent.

The International Copper Study Group (ICSG) inferred that copper market was roughly balanced in June, although production outpaced consumption in the first half of this year. This was good news for copper yet also made it susceptible to macro sentiments outside of supply-demand.

Market positioned long gold ahead of Janet Yellen’s lecture on Thursday (Asia’s Friday morning) at University of Massachusetts, and as Japan stocks fell. A delay of interest rate hike would ease pressure on gold in comparison to other interest-yielding assets. The precious metal is aiming for the topside with resistance levels at 1136.70 then 1140.02.

The Fed Chair previously declined to state her own view of when a rate rise would be appropriate at press conference after Fed’s September meeting. Speculation is ripe on whether she may give out clues this time. Fed funds futures currently priced in merely 42.6 percent of a rate rise by year-end, with the first meeting at higher than 50 percent chance being January 2016.

GOLD TECHNICAL ANALYSIS – Gold rose up to a support-turn-resistance at 1136.7 and is currently in pause, with higher extensions towards 1140.02 possible during the rest of today. Support levels for the bulls to watch out or place their stops are today’s low at 1129.6, followed by 1124.59 then 1121.43.

COPPER TECHNICAL ANALYSIS – Copper is in lackluster on a second day, trapped within a range of 2.2855-2.3250. Intraday momentum shows a weak upward bias hence the bulls could keep watch of resistance levels at 2.3250 then 2.3625 and 2.3885 for early signs of a rebound after the crash two days ago. Low volatility and volume hinder trading opportunities in copper other than range trading. 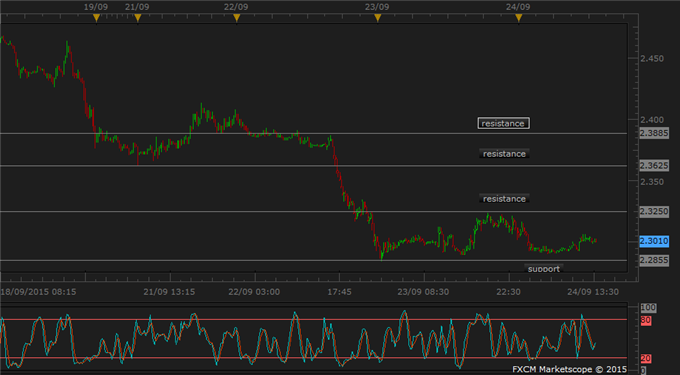 CRUDE OIL TECHNICAL ANALYSIS – WTI oil crashed through 3 big figures from 47.15 down to 44.41 overnight. Oil is on a rebound after such massive move albeit weak upward momentum. WTI will likely hover over this recent bottom and support level, until new market developments emerge. At top, resistance levels are found at 45.37, 46.69 and the recent top at 47.15. 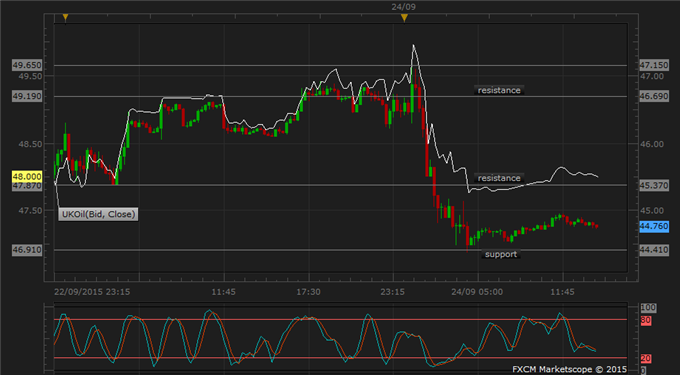