The most watched data from China, Flash Caixin Manufacturing PMI (purchasing manager’s index) fell to the lowest since March 2009 at 47.0 in September versus 47.3 in August. This unexpected disappointment evoked a deeper round of risk-selling after earlier global equity losses, and will likely last through European and US sessions.

The ASX, Hang Seng and Shanghai Composite shred around 2 percent each, while Nikkei remained closed until Wednesday. 10-year and 3-year yields in Aussie government bonds fell rapidly around 4 and 3 percent as bonds were bought.

The US dollar’s continuing recovery and this latest risk-selling effectively limited the topside of commodity prices today. After China PMI, Oil and copper reversed their earlier climbs where daily tops were established.

Both WTI and Brent oil rose after the American Petroleum Institute reported August stockpile fell by 3.68 million barrels from July, although it is still 154.7 million barrels above the same time last year. News of partial outage by Colonial Pipeline over North Carolina-New Jersey to investigate gasoline odours also gave oil another leg up.

Although China data pressured WTI down to the 42.15-42.30 area, the above upward momentum should keep prices away from further downside extensions. Brent oil topped out at 49.28 just before China PMI and WTI topped out at 46.65 overnight on its last trading day of October futures contract.

Copper was little changed given its sizeable losses overnight, simultaneous to an equity rout after the Asian Development Bank cut Asian growth forecasts on Tuesday. The bank projected China’s growth at 6.8 percent in 2015 and 6.7 percent in 2016, and lowered China’s commodity consumption estimates. Copper led industrial metals on the way down, tumbled to 2.2855 in New York, which should act as an intraday support level today.

London market propped up gold a little before ECB’s President Draghi delivers a testimony to the Committee on Economic and Monetary Affairs of the European Parliament. His testimony is widely expected to be bearish which would enhance risk selling. The EUR already lowered against most G10 currencies. Nevertheless, gold remained in a two-day drop coming up to Federal Reserve Chair Yellen’s talk at University of Massachusetts on Thursday, where she might reveal her stance on viability of a rate cut in 2015.

GOLD TECHNICAL ANALYSIS – Gold lingered above the 20-day moving average at 1123.14 with no clear sign for a clean break below that in the near term, although momentum signals point to further downside. It gave back half of the gains after Fed so far. If the 10-day moving average holds at 1120.23, bullion may set on a consolidation period around it. 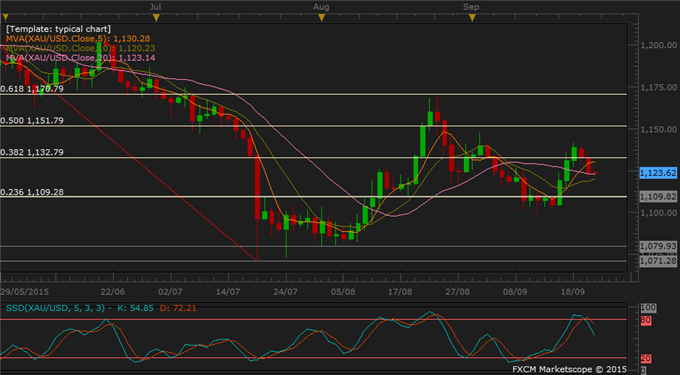 COPPER TECHNICAL ANALYSIS – Copper fell below a support at 2.3060 yesterday and currently sets to retrace upper levels from a low at 2.2855. Range traders could benefit from this retracement, after such a big drop yesterday, with the upper bound of range placed around 23.6% Fibo at 2.3822. 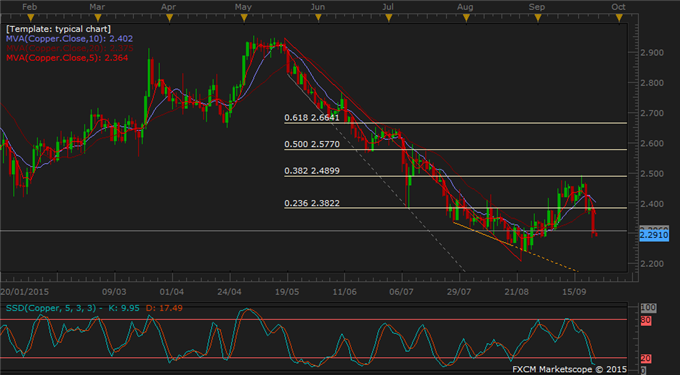 CRUDE OIL TECHNICAL ANALYSIS – WTI oil topped out at 46.65 and the upward momentum prior to China data should be enough to sustain prices around the new found area of 42.15-42.30. Yesterday’s low was below 45.50 mark and may have been the bottom in near future. Oil bulls could look for dips near there to enter long. 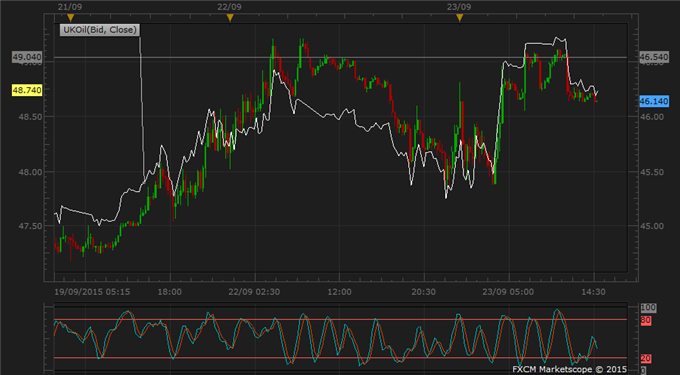