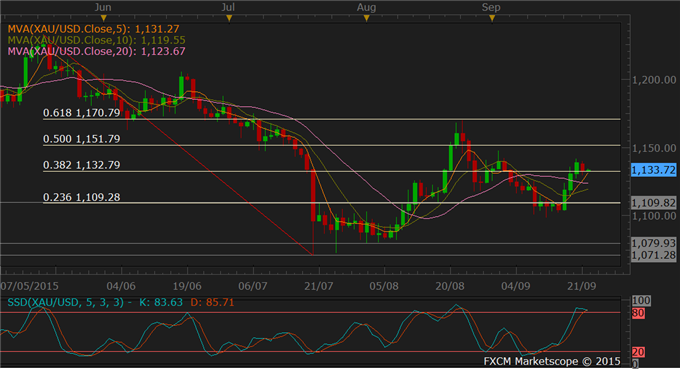 Commodities bucked the risk-on trend in the Asian morning with oil, copper, and even gold falling in contrast to risk-buying where Asia stock rallied and bonds declined. This was partly due to the US dollar rebound, as market moved on from Fed to focus on actions by the European Central Bank and Bank of Japan – both are on an easing cycle with (consequently) weak currencies.

Copper retreated alongside the metal complex, with zinc dipping to a fresh record low since 2010. China’s strong copper imports did not manage to push up prices. Monthly data from the General Administration of Customs showed that imports of refined copper rose 12 percent in August from a year earlier, while copper concentrates (unrefined ore) rose 20 percent.

The data was somewhat drowned out by economic worries and a swelling copper surplus. The International Copper Study Group, an inter-governmental organization of copper producing and consuming countries, reported a 15,000 tons copper surplus in the first six months of 2015, versus a deficit of 576,000 tons a year earlier.

Oil suffered the biggest loss among major commodities so far today, although this is but a slight setback to a whopping 5.65 percent rise from a 44.24 bottom in the last two days. If WTI prices manage to stay above 45.54 support, oil may still hold on to upside extensions.

The Fed’s decision to keep interest rate lower for longer eased concerns of a USD bull run that would put more pressure on oil prices. However demand remained weak as China’s commodity report noted a meager 4.6 percent year-on-year growth of crude oil consumption in August, versus 18 percent in July. Oil imports also dropped from 29.3 percent in July to 5.6 percent.

Prospect of Iranian oil worsening the supply glut has finally captured attention after it was largely overlooked in the aftermaths of the Federal Reserve’s meeting. With various push and pull factors in place, oil may see large swings in the near-term. For now, the bulls are enjoying a reprieve with oil prices staying supported post-Fed.

Gold lowered from its top at 1141.84 as speeches from Fed members after September meeting concurred on a rate rise in the near future. The impending higher-yield environment and moderate USD gains following those comments put pressure on gold. Nevertheless, bullion investors still enjoy a much needed break with muted volatility and elevated prices. Today prices come above 1129.6 support level.

GOLD TECHNICAL ANALYSIS – Gold held on to 38.2% Fibo at 1132.79 amid subdued price action today. There has been no signal referring to downside extensions, so gold will likely linger around this level. Further upside may also be limited with momentum in exhaustion as we pointed out yesterday. Gold investors look to a consolidation period ahead, before volatility resumes.

COPPER TECHNICAL ANALYSIS – Copper failed to sustain a rebound from a recent bottom at 2.3625 today, intraday prices is approaching the support area of 2.3625-2.3665. If prices can hold up above this with no break, there may still be chance for copper to gather strength in the next few sessions. The bears could watch out for opportunities below these levels. 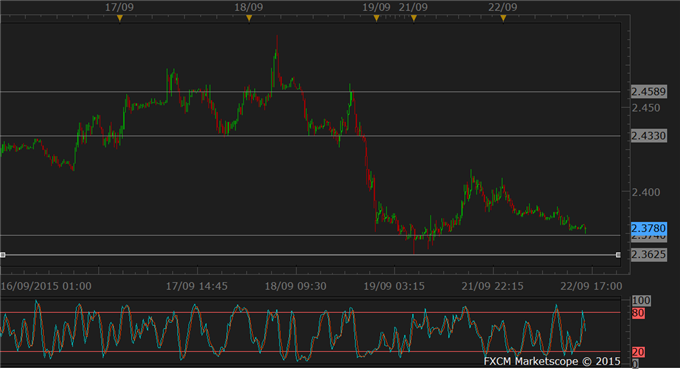 CRUDE OIL TECHNICAL ANALYSIS – WTI oil swung around in its September corrective range above 46.50 support region, with a pivot of 38.2% Fibo at 46.92. The latest developments hint at further downward extensions although the 20-day moving average at 45.13 provides moderate support in the short term. Like gold, oil is stuck within a range. Range trading opportunities may present at either bound. 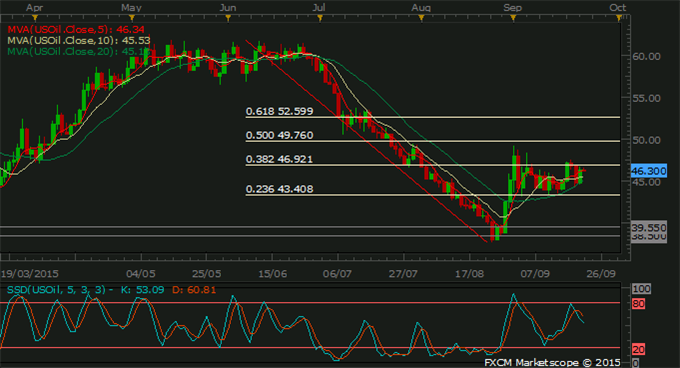