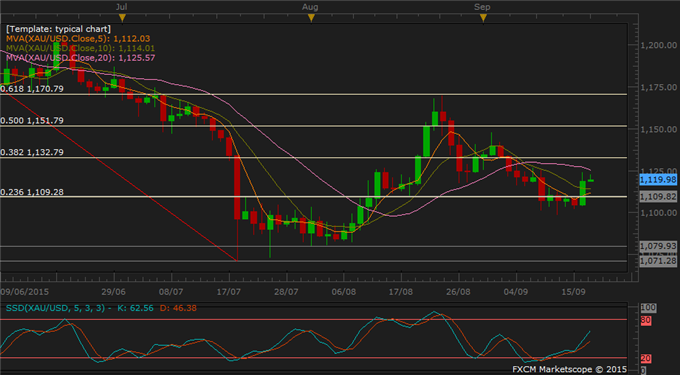 Commodities and their associated currencies rallied alongside equities on a second day, barely before the Federal Reserve decides on upcoming interest rate. The Shanghai Composite, Hang Seng, ASX, Nikkei all consistently held gains in Asia. US dollar weakness throughout London and New York trading also put a base underneath commodity prices.

Gold mounted 1.52 percent to peak at a weekly high of 1124.25 in New York, before it stabilized in the range of 1119-1120 in Asia. The first drop of US inflation data since January negatively swayed expectations for rate rise, hence propped up bullion prices. August Consumer price index fell 0.1 percent from last month, although it rose 0.2 percent from last year in line with forecast. Low energy prices have kept US inflation below the Fed’s target.

A very thin market and weak US dollar exaggerated this climb. Trading volume on COMEX this week has dropped to half of the daily average in this year, and daily price volatility reached the lowest in eight years. Market is decidedly quiet pending cues from the Federal Open Market Committee. Less than a day into Federal Reserve decision, US Fed fund futures securities still priced in merely 32% chance of a 25 basis point move at September 17 meeting.

Oil held gains in the Asian morning after it rallied to almost two-week high following a surprise inventory drop reported by the EIA. The 2.1 million barrels reduction last week resulted from a sixth week of output slide and a first pick-up in refinery activities since July.

WTI oil prices dropped to 46.96 earlier, which may hold as an intraday support level. There is scope for further upside extensions up to August 31 high at 49.33, the recent top after a rock bottom at 37.75.

Copper cooled down to hover above 2.4470as Chilean copper mines were reported unscathed from the earthquake. Soon after the Asia open, prices rallied to the highest since July at 2.4745 upon this threat.

Notwithstanding this latest incident, copper prices have firmly edged up from the 2.3885 bottom on September 15. The rebound in China equities in past two days effectively eased growth concerns and revived demand outlook for copper. The metal will be particularly sensitive to Fed’s decision tonight as it is correlated (positively or negatively) to most of the affected securities: Asian/China equities, US dollar, and even economic growth implication.

GOLD TECHNICAL ANALYSIS – The rally of gold paused below 20-day moving average at 1125.6, a resistance level that was mentioned in past reports. Momentum continued building up and today prices have focused on the upside. The next firm resistance level to watch out for is the 38.2% Fibo at 1132.8. Also, event risk of Fed rate decision could avert price action abruptly.

COPPER TECHNICAL ANALYSIS – Copper is testing 38.2% Fibo and resistance level at 2.4899 once more, although the chance of a break is slim. The copper bears may watch out for correction or reversal from this level. Uptrend signal in moving averages is in pause, simultaneous to unclear momentum signals. Copper would rise sharply if tonight event leads to USD fall, given the crowd of stops placed above resistance level during the recent correction. 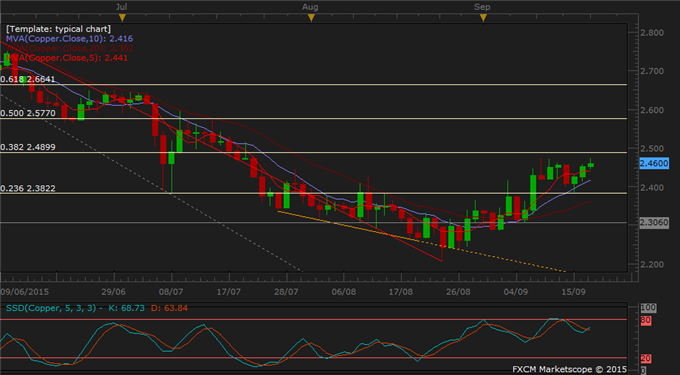 CRUDE OIL TECHNICAL ANALYSIS – WTI oil today climbed above 38.2% Fibo at 46.82, following yesterday’s ascent. The level likely acts as support during the course of Asian trade, the bulls should keep stops tight around that. Momentum currently headed upside, however this could change quickly with event risk tonight in the US. There would be more bullish signals if prices can retain in the range between two Fibo levels at 46.82-49.63 onto the next trading day. 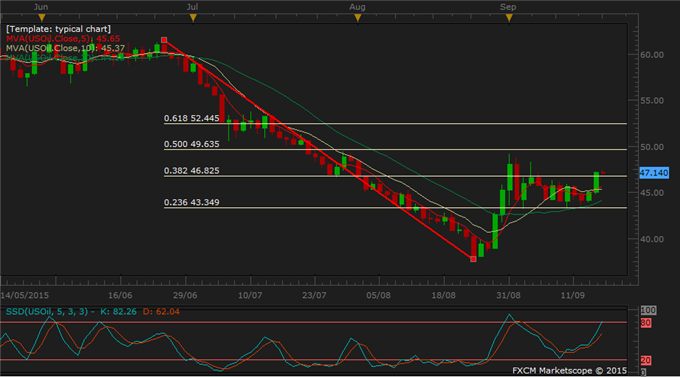