Commodities were unresponsive to an Asian stock rally, instead appeared edgy over US dollar strength and profit-taking before Fed’s meeting. The ASX, Hang Seng, Nikkei each were up around 1 percent by Asian noon. Overnight, US dollar gathered strength in correlation to tumbling US treasuries.

At this close to a Federal Reserve’s rate decision, volatility in commodities and currency markets tend to be absorbed quickly. All parties prefer to sit still or take profit, rather than chasing after price action.

Oil advanced on a second day and stabilized around 44.80 after topping out at 45.25 following a decline in US shale output. The American Petroleum Institute reported a 3.1 million barrels drop in inventories last week, preceding official data from the Energy Information Administration today.

Earlier in New York session, WTI oil tumbled to 43.92 after the White House withdrew support for a House bill to lift ban on US crude exports, effectively prolong the US supply glut. Currently, US shale oil can only be sold to Canada and to a much lesser extent Mexico.

EIA’s inventory report today may spur intraday volatility which has otherwise reduced ahead of event risk. On the downside, the 20-day moving average offers a tentative support level at 43.73.

Copper weakened in Asia in spite of share gains and mine shuts, partly contributed by profit taking after a rally in New York. The Financial Times reported that recent renminbi devaluation and the ensuing spread between on-shore and off-shore currencies have encouraged copper imports into China. However headwinds remained for copper in term of actual demand from this world’s largest consumer.

Gold stayed dormant during the past three sessions as buying and selling interests waned ahead of the storm. Gold will be the first asset to react (in reverse) to an interest rate hike, or no-hike. It stands apart from the other safe haven assets by carrying no yield, which effectively diminishes investors’ return in a tightening cycle where all other securities adjust to higher market returns.

GOLD TECHNICAL ANALYSIS – Gold flat out during the few days preceding Federal Reserve meeting and little action can be seen. Support levels to watch during the day are at 1101.7 and 1098.6. Long term support levels came under those, at 1079.9 and 1071.3. A light downside bias is present in intraday prices. 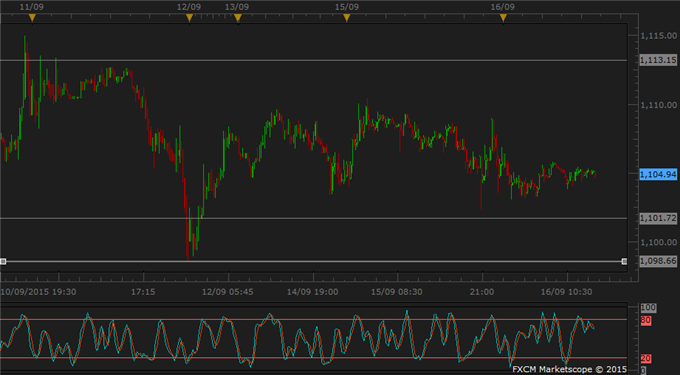 COPPER TECHNICAL ANALYSIS – Copper extended the downside below 20-day moving average yesterday and momentum signals indicated further decline ahead. The 23.6% Fibo at 2.3822 provides immediate support for now, which will likely contain price action coming up to Fed meeting, except for unexpected swings. There is little upside potential and the top is firmly capped by another Fibo at 2.4899. 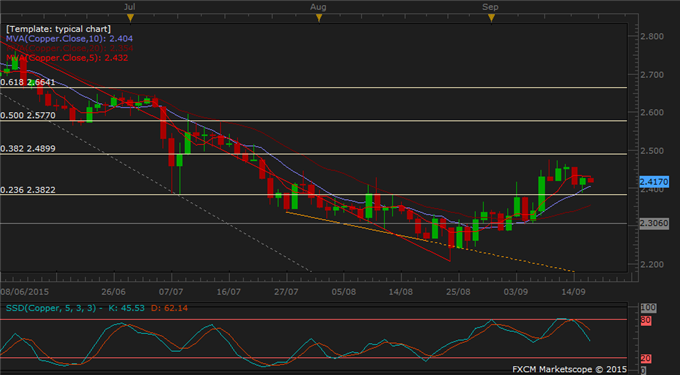 CRUDE OIL TECHNICAL ANALYSIS – WTI oil recovered from a plunge down to 43.92 and topped out at 45.25 during New York session. This brought intraday prices back to the high 44s region, in line with the progressive climb during the past few days. Oil enjoys support on the upside for now, although it remains susceptible to sudden volatility. The bears and bulls alike may take this opportunity to position according to their views - of course after the Fed effect wears off. 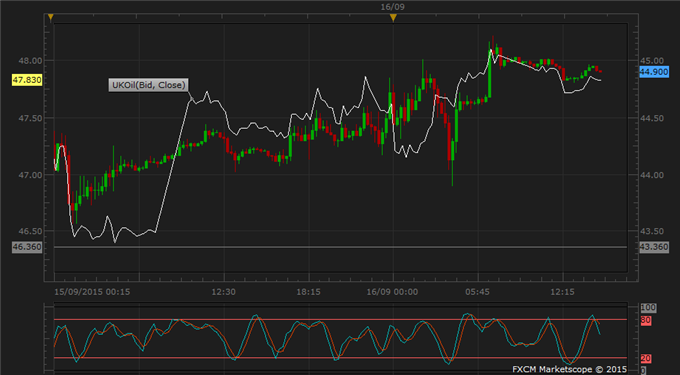